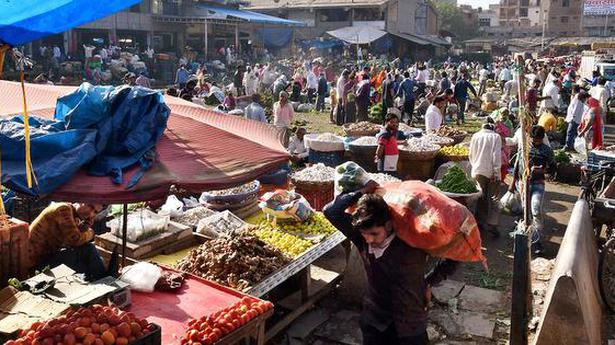 After witnessing a night of panic buying following Prime Minister Narendra Modi’s announcement of a 21-day restriction on non-essential services, grocery stores and supermarkets across the city were busy restocking on Wednesday and tried to enforce social distancing between customers.

Despite appeals to not hoard essentials, large packets of rice and atta, bread and tetrapacks of milk and juice were out of stock at many stores. Some local vegetable and fruit vendors were found selling produce at inflated prices but admitted that there was no shortage at the wholesale market.

In Kalkaji, grocery and supply stores were busy restocking empty shelves in expectation of more panic buying. Employees at one supermarket were seen enforcing social distancing by limiting the number of customers inside the store. People standing in line at several markets were also asked to maintain distance between each other.

Following the Tuesday night announcement, there was confusion at Nizamuddin East after a grocery store shutdown believing that a full lockdown had been ordered. Long queues were seen at other stores with bread, eggs and butter flying off the shelves. The stores got a fresh supply on Wednesday and orderly queues were seen. Fruit vendor Mian Rahman said: “Phal toh mandi mein hai, par police ke dande se bach bach ke laa rahein hain [there is plenty of fruit at the wholesale market, but we have to dodge police lathis to bring the produce to customers].”

In CR Park’s Market 1, store owners said that bread, eggs, curd, rice and flour were in high demand and disappeared off shelves within minutes of the PM’s speech. On Wednesday, only one of the three grocery shops was open and witnessed long queues. While the main vegetable market was closed, there were a couple of vans, which went around in the colonies selling produce.

Parul Chatterjee, a housewife said: “We had been stocking up in small quantities over the last one week. We did not realise that a 21-day lockdown would be announced. Even though authorities are saying that essential items will be supplied and that there is no reason to panic, it is difficult not to. We are just worried. Already items like bread and eggs are out of stock. There are senior citizens in our family, so we cannot take the risk of not buying items when they are available.”

Two departmental stores near the Yamuna Expressway Authority office in Greater Noida’s Omega 1 did brisk business while a larger store some distance away was shut.

“We are trying to stock up as much as we can given the duration of the lockdown. There have been no issues regarding supply so far as edibles are concerned,” said a store manager on condition of anonymity. He admitted that some customers were trying to purchase flour and milk in quantities that “seemed implausible for consumption” over three weeks.

“People are trying to buy 30 kg of atta and more than half-a-dozen packets of packed milk. We are requesting such customers not to do this, so that others who may be running out of the same items can buy them,” the manager added.