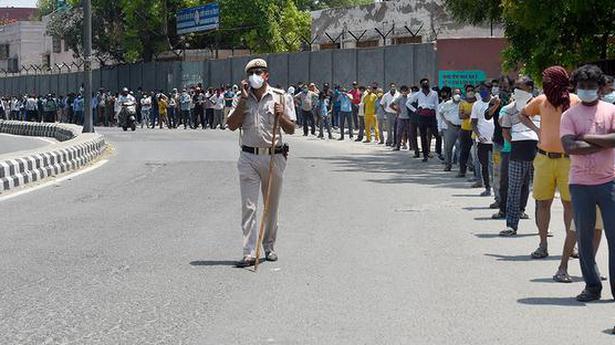 The Delhi government has collected ₹600 crore in revenue from May 1 to 22, which is considerably higher than ₹400 crore collected during the whole of April. The increase is mainly due to revenue from liquor sales and opening up of a part of the economy, according to officials.

“Tax from vehicle and property registration is very less even in May,” an official said.

In April, all liquor shops in the city were shut, and in May the government initially opened 160 vends. More vends are set to open. In May, the government had also levied a 70% special fee on the MRPs of all brands of alcohol. According to Excise Department records, over ₹110 crore was generated from the ‘special corona fee’ on such products between May 12 and 21.

Revenue losses are mounting for the Delhi government and the Delhi Metro Rail Corporation (DMRC) owing to the lockdown, official data reveal.

With Delhi Metro operations suspended, the DMRC is facing a loss of approximately ₹10 crore a day. Continuing restrictions are also shaving a substantial chunk off the revenue being generated by the Delhi government, but things are looking up this month, compared with last month.

Operations on the nearly 400-km network across Delhi-NCR has remained suspended since March 22.

“The lockdown is still on, and there has been no revenue during this period. However, the fixed expenditure on staff salary, bare minimum maintenance and so on are being incurred. Details are not available as on date,” the official said. Officials said guidelines would be put in place, even as the DMRC devised strategies to boost revenue.

“The DMRC has to follow government guidelines on maintaining social distancing among passengers as far as farebox revenue is concerned. Non-farebox revenue depends on market conditions, and is governed by demand and supply principle,” the official added.

Sport Newsresults.in - May 30, 2020
0
JOHANNESBURG (South Africa): Professional cricket in South Africa got clearance on Saturday to be able to return to training and playing. The regulations...