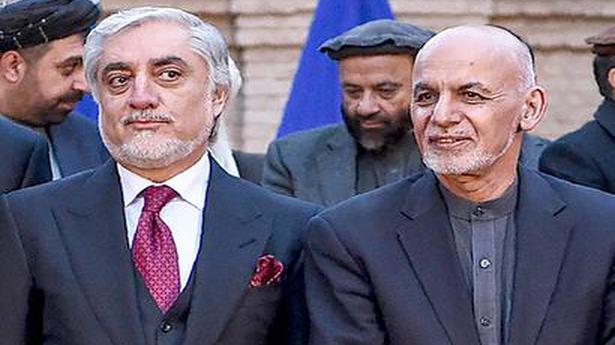 While President Ghani was declared the winner of the September 2019 elections by the country’s Independent Election Commission, Mr. Abdullah alleged election fraud and declared himself as the rightful winner, ensuing over two months of political uncertainty.

The latest agreement is the result of many rounds of negotiation between the two rival leaders and pressure from the U.S., following a visit by Secretary of State Mike Pompeo, who also threatened to cut $1 billion in aid to Afghanistan unless a settlement was reached.

According to the deal, President Ghani will retain the presidency, while Mr. Abdullah will assume a newly created office of the Chairman of the High Council for Peace and National Reconciliation. He will also be appointing 50% of the Afghan Cabinet and other provincial offices. “The agreement is not a privilege or a handout,” Mr. Abdullah said during the signing ceremony. “It’s rooted in the last election and every clean vote. It comes at a very difficult time when we face serious threats,” he said, referring to the increasing violence in Afghanistan.

In his new role, Mr. Abdullah will be responsible for leading the much-delayed intra-Afghan talks with the Taliban. “Dr Abdullah’s new office is charged with the task of not just starting negotiations but also with building a national, regional and international consensus for peace,” explained Zalmay Nishat, a close aide to Mr. Abdullah. “There are many factions within Afghanistan that still need to be addressed.

The process also needs to include voices of women, civil society, political figures and even the war victims who still seek justice. And lastly, there is a need to balance the interest of the international community that has invested here,” he elaborated.

However, despite the momentary relief, Afghan analysts remain sceptical whether the agreement will provide the stability needed to initiate the peace negotiation with the insurgent group, which has continued to attack Afghan forces and civilians despite making a deal with the U.S. in February to end the 19-year-long conflict.

The growing violence in the country has already brought the current administration to an impasse with the Taliban who they blame for the increasing attacks. President Ghani launched an offensive against the Taliban following the recent attack on a maternity hospital in the Afghan capital that resulted in 24 deaths, including babies, pregnant women and health workers. He also suspended the release of Taliban prisoners that was promised by the U.S. in their deal to the Taliban as a trust-building gesture ahead of intra-Afghan talks.

“Being the go-to guy for peace talks, Abdullah will have to deliver by starting the talks. However, there are times like these when Ghani will push for military operations. There will be a difference of opinion between the President and Abdullah on this very matter,” reasoned Hekmatullah Azamy, deputy director at the Kabul-based Centre for Conflict and Peace Studies. “I anticipate in the coming days that there will be certain blame-gaming between the two, where Abdullah will ask to move forward on the peace talks but Ghani might want to focus on the military approach.”

Mr. Nishat, Mr. Abdullah’s aide, expressed similar concerns for the future implementation of the deal. “There is the war rhetoric and peace rhetoric within the administration in Afghanistan. If the war rhetoric is stronger, its implications will block efforts of prisoner release [and initiating talks], which could translate to an increase in violence,” he said. “It will create friction between the two. That is my worry.”

Additionally, the deal also provides Mr. Abdullah the security and protocol privileges of the “second person” in the country after the President, a position usually held by the Vice-President. While President Ghani’s Vice-President, Amrullah Saleh, has not commented on the issue, he was not present at the signing ceremony.

Despite the challenges, those watching the development closely remain hopeful for an optimistic outcome. “Dr. Abdullah’s success and progress will depend on the team he builds around him, and also on the kind of support he receives from the Americans,” Mr. Azamy said.

(Ruchi Kumar is a journalist based in Kabul)

International Newsresults.in - May 31, 2020
0
U.S. President Donald Trump said on Saturday he would postpone the Group of Seven summit that he wanted to hold in late...

Will invite India and Russia, says Donald Trump as he postpones...