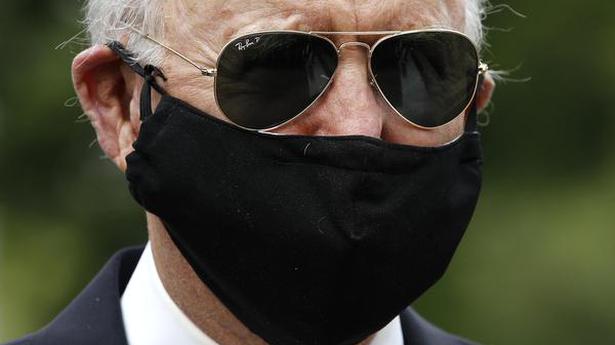 Joe Biden released a video Wednesday evening marking the grim U.S. milestone of 100,000 Americans killed by the coronavirus, saying somberly, “To all of you hurting so badly, I’m so sorry for your loss” and “This nation grieves with you.”

In the video, the presumptive Democratic presidential nominee directly addresses those who have lost relatives and friends. Evoking the personal tragedies he’s faced in his own life, Mr. Biden said, “I think I know what you’re feeling.”

“You feel like you’re being sucked into a black hole in the middle of your chest,” said Mr. Biden, who lost his first wife and young daughter in a 1972 car crash and an adult son to cancer in 2015. “It’s suffocating.”

Mr. Biden was attempting to display compassion in contrast to President Donald Trump, who critics say has shown little empathy and made only passing acknowledgement of the pandemic’s death toll – instead focusing on issues like an escalating battle with Twitter for fact-checking a post of his.

Mr. Trump was in Florida to watch a space launch that was delayed by inclement weather on Wednesday and didn’t address the nation reaching the death milestone upon returning to Washington. But the White House said, “President Trump’s prayers for comfort and strength are with all of those grieving the loss of a loved one or friend as a result of this unprecedented plague, and his message to this great nation remains one of resilience, hope and optimism.”

“The American people have always been strong and resilient, and the President is proud of their spirit, courage and determination every single day to defeat this virus,” White House spokesman Judd Deere said in a statement.

The U.S. death toll is a best estimate and almost certainly an undercount because many people have not been tested, and studies suggest people can be infected with the virus without feeling sick. There have been more than 5.6 million confirmed cases worldwide, according to Johns Hopkins University, and more than 350,000 people globally have died from the virus. The U.S. has the most reported deaths by far and reached 100,000 deaths in less than four months.

In Mr. Biden’s video, the former vice president looked directly into the camera and spoke softly from the makeshift basement studio of his Delaware home.

For months, Mr. Biden has blamed Mr. Trump for inaction and denial in the face of the outbreak that he said drove the American death toll needlessly higher. In Wednesday’s video, Mr. Biden didn’t mention the president by name but referenced his administration in saying that the nation’s loss of life was “made all the worse knowing that this is a fateful milestone we should have never reached that could have been avoided.”

Mr. Biden also pointed to the tragedy in his own life as he sought to provide comfort to the bereaved families left behind.

“I can promise you from personal experience,” he said, reprising a line he used before, “the day will come when the memory of your loved one will bring a smile to your lips before it brings a tear to your eyes.”

“For all of you who are hurting so badly, I’m so sorry for your loss,” Mr. Biden said. “This nation grieves with you. Take some solace from the fact we all grieve with you.”

Word of the U.S. surpassing 100,000 deaths from the coronavirus broke as Mr. Biden was addressing a virtual fundraiser on Wednesday evening. Rather than reference his campaign’s release of the video, however, Mr. Biden only sadly shook his head.

During that event, Mr. Biden was asked about his ongoing search for a running mate and said that a four-member committee he’s selected to help him decide has now interviewed his top choices. Mr. Biden said the next step is for him to speak to each candidate personally, followed by a vetting process, “which takes between six and eight weeks.”

“I hope that, by around the first of August, or in that range, we’ll be able to name who’s going to be my vice presidential nominee,” Mr. Biden said.

U.K. to allow quarantine-free travel to some low-risk countries

Sport Newsresults.in - July 3, 2020
0
PRAGUE: The Czech Republic MotoGP in Brno on August 9 will be held behind closed doors due to concerns about the novel coronavirus,...