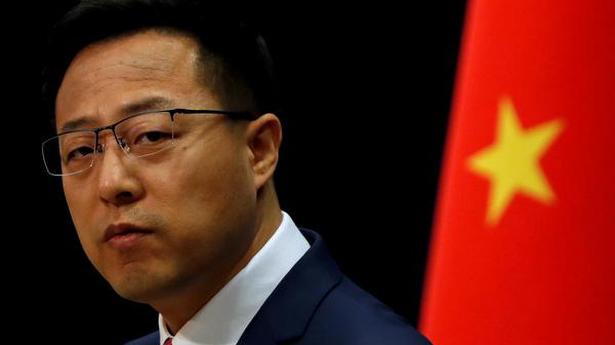 China’s Foreign Ministry on Wednesday said there was “no need for third party intervention” on the border row with India and both nations were “capable” of resolving the issue. This comes a day after Prime Minister Narendra Modi and U.S. President Donald Trump discussed the border situation in a telephone call.

New Delhi on Tuesday said the border situation was discussed by the two leaders, during which Mr. Trump also spoke of expanding the Group of Seven to include India and invited Mr. Modi for the next summit to be held in the U.S. The other members are Canada, France, Germany, Italy, Japan and the U.K.

Last week, Mr. Trump offered to mediate between India and China amid the ongoing border tensions and New Delhi appeared to reject the offer, with officials saying that India and China remained “engaged” through diplomatic and military channels in Delhi and Beijing and at the Line of Actual Control (LAC) in order to resolve the situation along the boundaries in Ladakh and Sikkim. They noted that the matter was being discussed bilaterally. “We are fully engaged with the Chinese side to peacefully resolve the issue,” said Ministry of External Affairs spokesperson Anurag Srivastava.

On Wednesday, China’s Foreign Ministry said “there is no need for third party intervention” and that bilateral channels were open to resolve the tensions along the LAC. “China’s position on the border issue is consistent and clear,” said Foreign Ministry spokesperson Zhao Lijian.

“We have earnestly implemented the important consensus reached between the leaders of the two countries and have strictly abided by the relevant agreements between China and India, and committed to upholding national territorial security and sovereignty and also to upholding peace and stability in the border region. Now the situation is overall stable and controllable . China and India have a full-fledged border related mechanism and communication channel. We have the capability to resolve this issue through dialogue and negotiations. There is no need for third party intervention”, he stated.

After Mr. Trump’s offer, China’s State media accused him of trying to “drive a wedge between China and India”. After first making the offer in a tweet, Mr. Trump reiterated it to reporters on May 29. “They have a big conflict India and China. Two countries with 1.4 billion people. Two countries with very powerful militaries. India is not happy and probably China is not happy,” he said. “I can tell you; I did speak to Prime Minister Modi. He is not in a good mood about what is going on with China.”

Indian officials then unusually denied Mr. Trump’s May 29 claim that he had spoken to the Prime Minister. The call finally happened on June 2.

The Global Times, a Communist party-run newspaper, said in a commentary that “a conflicting China-India relationship serves [U.S.] interests”. “Washington believes the combined strength of Beijing and New Delhi could impair its interests in Asia and beyond. An opportunist U.S. has never given up its attempt to drive a wedge between China and India… the Trump administration emphasizes India as a major pillar in its much-touted Indo-Pacific concept.”

The newspaper, which noted that last year “India turned down Trump’s offer to “help” and “mediate” between India and Pakistan over Kashmir”, mocked Mr. Trump for his knowledge about India and China. “It seems Trump finally knows that China and India, the two largest Asian powers, share borders. Early this year, A Very Stable Genius, a book written by two Washington Post journalists, revealed that Indian Prime Minister Narendra Modi was shocked and concerned when Trump told him India and China did not share a border,” it said.

The commentary described the current stand-offs as “reminiscent of the 2017 Doklam stalemate”, which it blamed on India for “illegally construct[ing] defense facilities across the border into Chinese territory in the Galwan Valley region”. Noting that Doklam was “successfully solved with concerted efforts and wisdom,” it said “the latest dispute can be solved bilaterally by China and India.” “The two countries should keep alert on the U.S, which exploits every chance to create waves that jeopardize regional peace and order,” the newspaper said.

“India probably has found that the U.S. is not a reliable partner,” it said. “The self-centered “America First” policy endorsed by Trump can hardly reconcile with Modi’s ambitious “Make in India” campaign, and a trade deal was elusive even during Trump’s high-profile visit to India in February 2020 when the two were locked in trade frictions. India perhaps has been aware of the US’ bad history of mediation in which the US made troubles rather than solved problems, and which turned bilateral disputes into multilateral ones.”

China-U.S. ties have plunged to a nadir amid rising tensions over a growing number of issues, from China’s handling of the COVID-19 pandemic and trade ties, to Hong Kong and Taiwan.