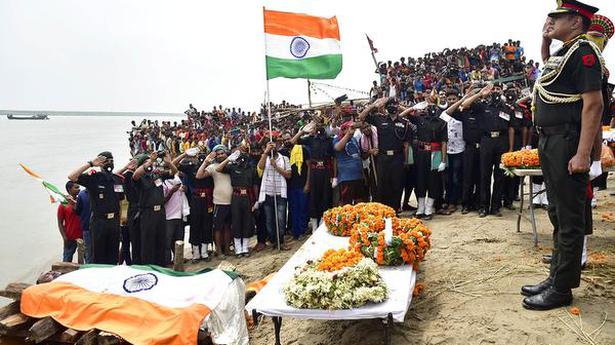 
People’s Liberation Army (PLA) officers at the Corps Commanders meeting with the Indian Army delegation on Monday repeatedly stated that the Galwan clash was an “unfortunate incident”, a top Indian official told The Hindu.

Watch | India-China stand-off on the LAC: A Timeline

India and China have agreed to disengage from three friction points” in Ladakh and pull back from their current positions, where the Indian army and the Chinese People’s Liberation Army (PLA) are engaged in an eyeball to eyeball confrontation, a second official said.

The three areas are Galwan, Hot Springs and the Finger area near Pangong Tso (lake) in Ladakh along the contentious Line of Actual Control (LAC). The three areas have witnessed unprecedented buildup of troops since April-May.

However, the PLA did not provide any details of Chinese dead or wounded in the June 15 Galwan Valley clash that killed 20 Indian soldiers.

The second official said the final details of the second round of Corps Commander level talks that were held on June 22 in Moldo on the Chinese side of LAC have not yet been finalised yet and the way ahead will depend on the progress made in the next three-four days.

The official added that the process of forces pulling back from their positions as part of the “de-escalation exercise” had been initiated and a formal statement would be issued only after the process is complete.

“The Galwan incident was raised in the meeting and China was told in the strongest terms that it was not acceptable. What triggered the incident is still being inquired and investigated into. They agreed that any flare up at the border could derail the efforts put in so far,” said the official.

The first official said that in Galwan area at least no permanent structures had come up and the Chinese had pitched prefabricated tents and made makeshift stone shelters.

“In Galwan, the Chinese PLA used to patrol and leave, but in the past few days they made a permanent presence and stayed for more number of days than necessitated, around 600-800 metres inside India’s perception of the LAC,” the official said.

In the Finger area near Pangong Tso, the Chinese built temporary structures a kilometre inside the Indian claim line. “China has shown a willingness to move. Both the sides have made good progress. All the friction points were discussed one by one in the meeting that continued more than ten hours,” said the official.

The Chinese side also raised the aggressive coverage of the Galwan incident by the Indian media with the Indian delegation.

‘I think she’s lovely and I wouldn’t mess with her’: NY Attorney General Letitia...