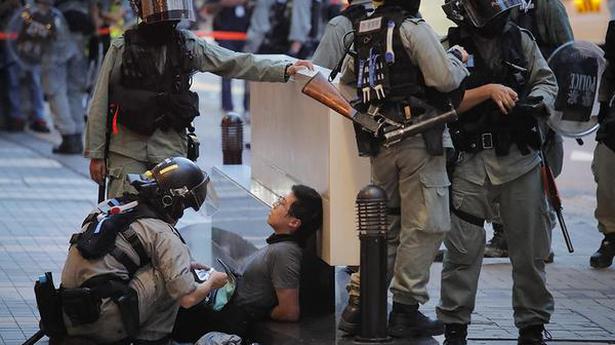 China appointed a hardliner to head a new national security agency in Hong Kong on Friday as police brought the first charges under a sweeping new anti-subversion law that has shaken the semi-autonomous finance hub.

Zheng Yanxiong — a party official best known for tackling protests on the mainland — will lead the office set up by the legislation that empowers mainland security agents to operate in Hong Kong openly for the first time, unbound by the city’s laws.

The appointment came as a man accused of deliberately driving his motorbike into a group of police officers became the first person in Hong Kong to be charged under the new national security law.

China’s leaders say the suite of powers will restore stability after a year of protests and will not stifle freedoms. But police have already begun arresting people for possessing flags and banners while the local government has made clear certain political views, especially calls for independence, are now outlawed.

On Thursday evening, Nathan Law, one of the city’s most prominent young activists, announced he had fled overseas to an undisclosed location, fearing arrest days after the pro-democracy party he helped found said it was disbanding.

Many Western governments — led by Britain and the U.S — have condemned the law and have angered Beijing by threatening to hit back with sanctions or offer sanctuary to Hong Kongers.

The office has investigation and prosecution powers and will monitor intelligence related to national security and process cases, in some circumstances handing them over to the mainland for trial. Mr. Zheng rose through the ranks of the local government in southern Guangdong province which borders Hong Kong, to serve as secretary general of the provincial Communist Party committee.

The 56-year-old is known as a hardliner who stamped out often-violent anti-corruption protests that erupted in Wukan, a village in the province, in 2011 after a local activist died in police custody.

“He is a tough enforcer, a law and order person,” said Willy Lam, an expert on China’s Communist Party at the Chinese University of Hong Kong.

Hong Kong was rocked by several months of huge and sometimes violent pro-democracy protests last year, a movement which Beijing has vowed to end with its new security law.

China has dismissed protesters’ demands for greater democracy and portrayed the unrest as a foreign plot to destabilise the motherland.

It has sought to ramp up oversight on Hong Kong’s government.

On Friday, the State Council also named Luo Huining — the current director of Beijing’s Liaison Office in the city — as the National Security Adviser to the newly-formed National Security Commission, chaired by Chief Executive Carrie Lam.

The most serious offences carry up to life in jail. On Friday afternoon, Tong Ying-kit, 23, was charged with the first national security crimes — terrorism and inciting secession. A police source said that Mr. Tong drove his motorbike into a group of police officers on Wednesday during protests, wounding three.

Loya Jirga | The council of elders

Sport Newsresults.in - August 15, 2020
0
NEW DELHI: One of India's biggest cricketing heroes, MS Dhoni has brought the curtain down on what has been a glittering international cricket...

Health Newsresults.in - August 15, 2020
0
A pedestrian wearing a protective face mask walks past the Centers for Disease Control and Prevention (CDC) headquarters in Atlanta, Georgia, on Saturday,...

Sport Newsresults.in - August 15, 2020
0
NEW DELHI: Continuing with its efforts to gradually open the sports centres for the country's athletes in a protected environment despite the cases...

CDC says quarantine guidance does not imply immunity to coronavirus for...

Wrestling camp to start from September 1; Bajrang, Narsingh, Vinesh to...