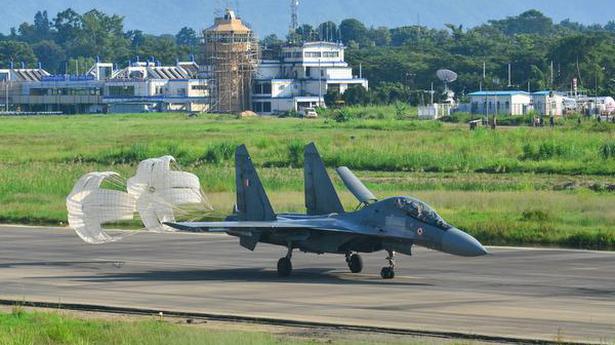 Amid the ongoing tensions on the border with China, the Defence Acquisition Council (DAC), chaired by Defence Minister Rajnath Singh, on Thursday approved deals worth ₹38,900 crore.

The Government of India said it was studying an international tribunal’s ruling that the Italian marines accused of killing two fishermen in the waters off Kerala on February 15, 2012, held “immunity” and would face a trial in Italy, not India.

India’s trade deficit with China fell to $48.66 billion in 2019-20 on account of the decline in imports from the neighbouring country, according to government data.

In their charge sheet, the Delhi Police have mentioned that these nine Muslim men were murdered in the period from the evening of February 25 till late night on February 26. Their bodies were recovered over a period of several days from the Bhagirathi Vihar drain.

Mental health professionals in the Kashmir valley have warned of an “epidemic of psychological disorders” among the children exposed to “rare, complex, ongoing trauma” due to the prolonged conflict in the region.

A CB-CID officer said a special team intercepted a car at the Gangaikondan checkpost on the Tirunelveli-Madurai National Highway, in which Mr. Sridhar was found fleeing towards Theni district, and arrested him.

A police spokesman said the security forces, including the police, have engaged the hiding militants in the encounter in Malbagh area of Srinagar. It’s third encounter in Srinagar since May. Earlier, five militants were killed in two separate encounters in Srinagar.

His cheering drew a sharp rebuke from former vice president Joe Biden, who is challenging Mr. Trump in the November election and said there is little to celebrate with the economy still in a dire state.

The spike in cases in the English city of Leicester, which led to local schools and shops this week being shut again and the July 4 reopenings delayed, was proof that “the virus is still with us”, he said.

The Super PAC which describes itself as a group of ‘alumni’ who served Mr. Bush and other Republican Presidents, Members of Congress and governors, believes “Principles matter more than politics,” as per its website.

While not disclosing what she and other top lawmakers were told about the reported bounties, Ms. Pelosi accused the White House of “putting on a con” in saying President Donald Trump was not briefed on the intelligence because it was not fully verified.

With the title secured a week ago, there was little at stake for Juergen Klopp’s Liverpool side who showed far from their usual levels of intensity but the loss, just their second of the league campaign, was an emphatic reminder that City will be desperate to regain their crown next season.

Ramos converted the 79th-minute spot kick after Getafe made its first mistake in an otherwise flawless defensive performance to stifle the more talented rivals. It was the ninth league goal of the season for the Madrid center back.

Talks between India, China under way at Major General level to discuss Depsang

Business Newsresults.in - August 9, 2020
0
NEW DELHI: India's plan to regulate "non-personal" data has jolted US tech giants Amazon, Facebook and Google, and a group representing them is...

Sport Newsresults.in - August 9, 2020
0
NEW DELHI: Veteran batsman Suresh Raina expressed his excitement ahead of the 13th edition of the Indian Premier League (IPL), which is scheduled...

Can’t wait for season to begin: Suresh Raina ahead of IPL...