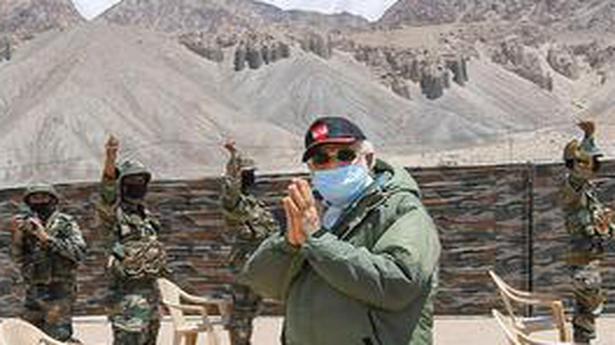 In a surprise visit to Ladakh, 17 days after Chinese troops killed 20 Indian soldiers in the Galwan Valley, the Prime Minister said India’s determination to protect its territory was “as high as the Himalayas”.

Mr. Zhao also warned against “artificial barriers” that would hurt economic relations, in reference to India’s recent moves on the trade and investment front, from banning 59 Chinese apps to announcing a halt to highway projects.

Highlighting the need for self-reliance in the sector, Mr. Singh said the country’s power equipment import bill was about ₹71,000 crore during 2018-19, including purchases worth over ₹20,000 crore from China, even when the country had manufacturing facilities.

Japan opposes unilateral action that changes the status quo along the LAC between India and China, said Japanese Ambassador Satoshi Suzuki in a discussion on Friday with Foreign Secretary Harsh Vardhan Shringla on the India-China stand-off in eastern Ladakh.

In the three-minute long video “Ladakh Speaks” , the Congress leaders shared voices of people of Ladakh, who were talking about Chinese troops coming into Indian territory, building a metalled road in the areas between Finger 4 and Finger 8 and stationing themselves at Pangong Tso.

CAPA estimated that the second quarter beginning July too will be a washout. It reiterated that the market may only be left with 2-3 airlines if there is a delay in recapitalisation for the sector.

All General Managers were told to set up zonal and divisional multi-disciplinary BDUs comprising senior officers from Operating, Commercial, Finance and Mechanical departments. These groups would have frequent interactions with trade and industry representatives to scout for & attract traffic.

A Trump campaign official said the president, who has criticized protesters for tearing down statues during demonstrations against racial inequality, would portray the United States as “virtuous.”

“This afternoon I felt a slight fever and immediately quarantined myself at home,” Mr. Qureshi said on Twitter. He said he felt healthy and would carry on his duties from home.

The far-right leader used his veto power to remove articles obliging people to wear masks in shops and churches. Face coverings are already mandatory in several states, such as Sao Paulo and Rio de Janeiro, but this was the first such law on a national level.

“Though she has been treated, we will have to see when she actually takes the load whether she can run the 400m. If she can’t, we will switch her to 200m,” said Athletics Federation of India president Adille Sumariwalla to The Hindu.

The boxer had won the gold medal in the Asian Games held in 1998 in Bangkok. He had recently been taken on a special flight for cancer treatment in New Delhi and upon his return to Imphal by road he tested positive for COVID-19.