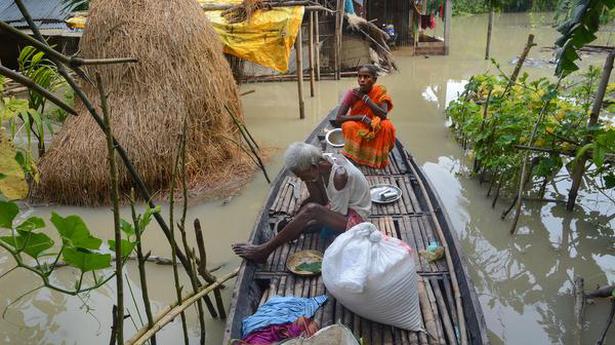 India and the European Union committed to a framework for strategic cooperation until 2025, and vowed to cooperate on their response to the coronavirus pandemic, and at the United Nations Security Council.

Assam’s flood death count increased by seven on Wednesday to reach 66. The water level, however, improved across the State Officials of the State Disaster Management Authority (ASDMA) said three of the seven people who drowned on July 15 were from Morigaon district. Two were from Barpeta and one each from Sonitpur and Golaghat districts.

Positive news on initial trials of the University of Oxford’s potential COVID-19 vaccine that has been licensed to AstraZeneca could be announced as soon as Thursday, ITV’s political editor Robert Peston said, citing a source.

Former Rajasthan minister Ramesh Meena on Wednesday hit back at Chief Minister Ashok Gehlot’s allegations about horse-trading and asked him how much money was paid to BSP MLAs who switched over to the Congress in his previous tenure.

A day after the marathon talks at the Corps-Commander level between India and China, the China Study Group (CSG) met on Wednesday evening and reviewed the progress of the talks for disengagement along the border, a defence source said.

Lessons should be learnt from the COVID-19 pandemic which saw unprecedented reverse migration, members of the Parliamentary Standing Committee on Home Affairs, headed by Congress leader Anand Sharma, said at a meeting on Wednesday.

As many as 1,647 new COVID-19 cases were reported in Delhi in the past 24 hours, taking the total to 1,16,993, according to a Delhi government health bulletin released on Wednesday.

Between 8.3 crore and 13 crore people globally are likely to go hungry this year due to the economic recession triggered by coronavirus (COVID-19), warns the State of Food Security and Nutrition in the World (SOFI) 2020 report. Estimates drawn from data available till March 2020 show that almost 69 crore people went hungry in 2019 — up by 1 crore in 2018.

When this century ends, India may no longer be a country of a billion, says a projection that appears in the online edition of the Lancet on Wednesday.

Morning Digest: Study finds that 76% of rural Indians cannot afford a nutritious diet, Trump appeals to GOP base as polls slide, and more

Cold response on day one at cinema halls