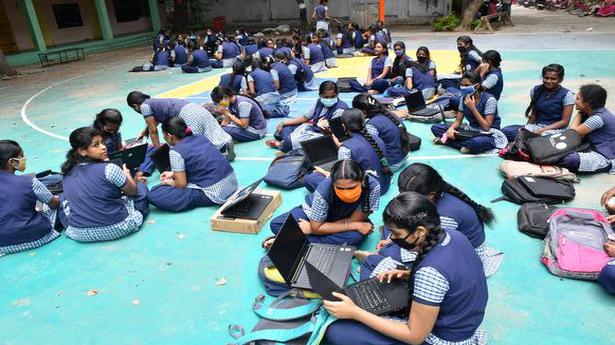 Although the Centre has recommended a three-hour limit on live online classes for school kids, it is up to States to actually frame and enforce mandatory norms. An online poll on the Local Circles has found that a majority of the over 20,000 respondents thought the limits were too restrictive, with parents from Karnataka, Delhi and Tamil Nadu especially keen to allow longer classes.

With the school closures caused by COVID-19 forcing many private schools to move to online classes instead, there have been concerns about the impact of extended screen exposure on children. The Centre’s Pragyata guidelines for digital education, prepared by the National Council of Educational Research and Training, recommended that live or synchronous online classes be held for no more than 1.5 hours per day for Classes 1-8 and three hours per day for Classes 9-12. However, these norms are only advisory in nature, with States expected to formulate their own rules based on local needs.

The Local Circles poll received responses from 21,322 registered respondents, who said they were parents or grandparents of schoolgoing children. It found that about half of parents wanted a four or five-hour limit for high-schoolers, along with a two to three-hour limit for Classes 1-5. They also proposed a new category of Classes 6-8, with almost 70% of parents suggesting a 2.5-3 hour limit for this group who cannot be clubbed in with primary schoolchildren.

Opinions differed by State. In Uttar Pradesh and West Bengal, a majority of parents believed that the overall cap of three hours proposed by the government should be followed. Only about a sixth of parents in these States wanted a 5-hour cap instead.

In Karnataka, on the other hand, only a third of parents are happy with the three-hour cap. Delhi and Tamil Nadu also have about a quarter of parents who want the maximum five-hour limit suggested on the poll.

“Screen time is not just about the live online classes. Teachers and schools have been haphazard in the way they give assignments in the new set-up, resulting in many children spending hours on the computer after the classes as well. It would be better to recommend zero screen time once classes are over to protect the children,” said Local Circles chairman Sachin Taparia, who is also a parent, and has written to State chief secretaries and the Centre with the results of the poll. “States must take into account the reality that parents are seeing before enforcing such rules.”