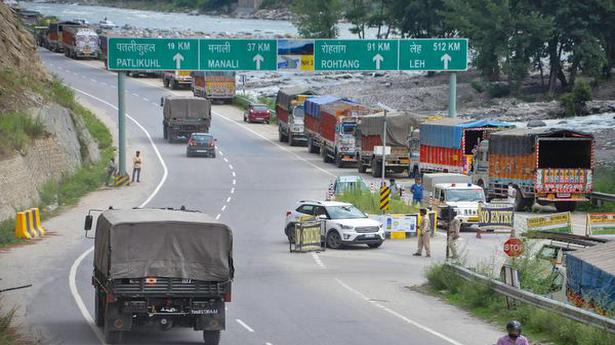 China on Tuesday said border troops had “disengaged in most localities” along the Line of Actual Control (LAC), but defence sources said disengagement had only been “partial” at one of the locations that Beijing appeared to be referring to.

A sero-surveillance study done in Mumbai has revealed that 57% of slum population and 16 per cent of non-slum residents in three civic wards had developed antibodies, indicating many people would already be affected by COVID-19 than the official tally suggests.

Mortality due to COVID-19 is approximately 2% to 3% in India, with most cases being largely asymptomatic, said Union Health Minister Harsh Vardhan on Tuesday, adding that this makes it important to create awareness about the higher risk of both morbidity and mortality faced by people with diabetes, obesity, and fatty liver and chronic liver diseases.

Finance Secretary Ajay Bhushan Pandey told the Parliamentary Standing Committee on Finance, headed by BJP MP Jayant Sinha, at a meeting on Tuesday that the government is in no position to pay the GST share of States as per the current revenue sharing formula, sources said.

With the world and India entering the middle phase in a two-pronged fight against the COVID-19 pandemic, including public health measures to curb the spread of the novel coronavirus and the race to develop a viable vaccine solution, global and regional cooperation between nations has never before been as important as it is today. Poonam Khetrapal Singh, Regional Director World Health Organisation South-East Asia Region, discussed the big questions on institutional learnings, transnational collaborationand challenges for India with Narayan Lakshman.

Bahujan Samaj Party (BSP) president Mayawati on July 28 said her party decided to “teach a lesson” to the Congress and Rajasthan Chief Minister Ashok Gehlot for the “unconstitutional” merger of its Legislature Party in the State by moving the High Court. She also said BSP had been waiting for the “right time” to hit back at the Congress for the merger.

A year after the Centre’s decision to dilute article 370 and bifurcate Jammu and Kashmir and Ladakh into two Union Territories, former chief minister Omar Abdullah says the government has been unable to resolve the issues it claimed the moves would result in. In a video-conference from his residence in Srinagar, Mr. Abdullah said events had left him cynical and bitter, but asserted was not quitting politics.

Stuart Broad grabbed his 500th Test wicket to set England on their way to a resounding 269 run win over West Indies in the third and final Test at Old Trafford on Tuesday.

Ben Stokes sprinting to long-off to field a ball off his own bowling in the second Test was an exhibition of the ‘cricketness’ of the sport. It didn’t make any difference to the score (the batsmen ran four), there was enough time left for England to win, and Stokes himself was the most tired man on the field after making 254 runs and en route to bowling 28 overs in all.

After a gap of two days, Kerala slipped back to the 1,000-plus cases a day pattern registering 1,167 new cases of coronavirus (COVID-19) on Tuesday.

States across the country have been forced to jump onto the digital education bandwagon over the last four months due to the interruptions caused by the COVID-19 pandemic. As the new academic year gets under way with schools still closed across the country, the Human Resource Development Ministry on Tuesday released a State-wise report documenting the spread of digital classrooms, e-textbooks and mobile learning apps.

The global prevalence of child wasting — lower weight for height — in 2020 could rise by 14.3%, translating into an additional 6.7 million children under the age of five suffering from it as the pandemic resulted in disruption of food systems and impeded access to healthcare services, according to a new study published in The Lancet on Tuesday.

Educational Board To Understand STEM In Simple Way

USA News Newsresults.in - October 30, 2020
0
Sgt. Jonathan Mattingly claims he is entitled to damages for medical treatment, trauma and pain he suffered after he was fired upon by Walker,...

The cops who shot Walter Wallace Jr. didn’t have Tasers. Here’s why that might...

USA News Newsresults.in - October 30, 2020
0
However, two queens managed to survive and were captured by entomologists from the Washington State Department of Agriculture (WSDA). It's unclear if both queens...

The Louisville, Kentucky, police officer shot while executing a warrant at...