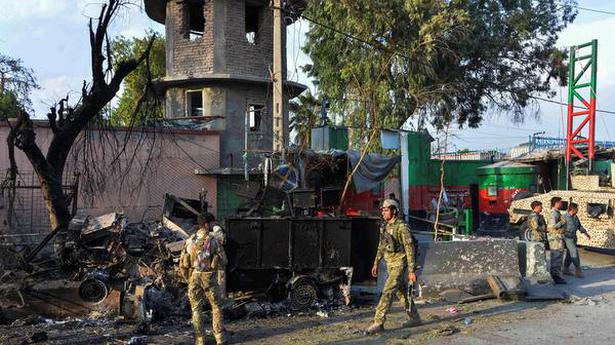 A doctor from Kerala may have been among the Islamic State (IS) terrorists who stormed a prison in Eastern Afghanistan’s Jalalabad on Sunday.

The suspect was identified as Ijas Kallukettiya Purayil (37), a physician from Kasargod in Kerala. A National Investigation Agency (NIA) official said on Tuesday that the agency had no confirmation so far about his involvement in the prison attack, but it was pursuing the leads with other security agencies.

Ijas’s photograph, along with those of ten others, was released by the propaganda wing of the ISKP on various social media accounts on Tuesday. At least two more Indians are said to have been part of the group that detonated car bombs at the entrance of the prison gate in Jalalabad on Sunday.

In the photo, Ijas is holding a sophisticated weapon with the typical black IS flag forming the background.

Around 30 persons were killed in the attack. All the eleven attackers are said to have been killed by the Afghanistan security forces.

Ijas left India with his wife Raffeala (29) and son in 2016 to join the Islamic State in Khorasan Province (ISKP). He is wanted by the NIA that has also issued a red notice against him and Raffeala.

Raffeala is presently lodged in a prison in Afghanistan. She and other Indian women who had joined the ISKP were among thousands of IS fighters and affiliates, including children, who surrendered before the Afghanistan authorities in November-December last year.

Raffeala was interrogated by Indian agencies in Kabul last year. She had then claimed that she was paid ₹5,000 by a Pakistani woman while leaving the IS controlled territory in Nangarhar.

This is the second instance of an Indian being involved in a terror attack in Afghanistan in less than six months.

The March 25 Gurudwara attack in Kabul when an Indian was killed was executed by Muhammed Muhsin, a 29-year-old man from Kerala’s Kasargod, who was also killed in the attack. This incident was also claimed by the ISKP.

Both Ijas and Muhsin were part of a group of 21 men and women who left India in 2016 to join the ISKP.

According to an NIA chargesheet filed in 2017, the main suspect, Abdul Rashid, used to conduct “pro-ISIS classes” at the residence of Dr. Ijas in Kasaragod.