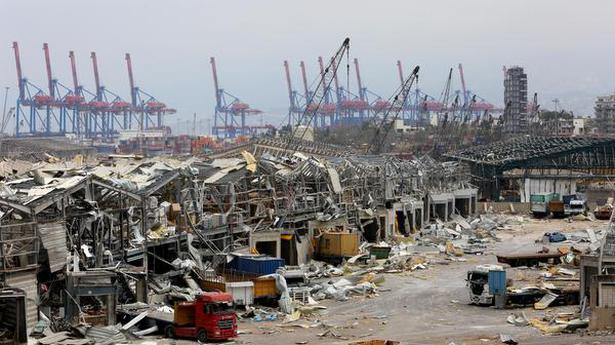 Lebanon’s State-run news agency says 16 employees at Beirut’s port have been detained over this week’s explosion that killed more than 100 people and wounded thousands.

The National News Agency quoted Government Commissioner to the Military Court Judge Fadi Akiki as saying on Thursday that 18 people have been questioned so far. All of them are port and customs officials, as well as individuals in charge of maintenance at the hangar where 2,750 tons of explosive materials have been stored for years.

Mr. Akiki said that the investigation began shortly after the blast occurred on Tuesday evening and will continue to cover all suspects in the explosion.

Coronavirus | Police and protesters clash in London over restrictions

Sri Lanka Podujana Peramuna | A party for the Rajapaksas

The Hindu Explains | Why are Democrats and Republicans squabbling over nomination to the U.S. Supreme Court?

Gilgit-Baltistan | The land of peaks, streams and disputes

Sport Newsresults.in - September 26, 2020
0
NEW DELHI: The COVID-19 pandemic has hit the ICC headquarters in Dubai as few of its staffers have tested positive for the dreaded...

Sport Newsresults.in - September 26, 2020
0
PARIS: Novak Djokovic insisted Saturday there will be no repeat of his sensational US Open disqualification at Roland Garros as the...

International Newsresults.in - September 26, 2020
0
The U.S. President is hoping the move will serve to galvanise his supporters as he looks to fend off Democrat Joe Biden in...