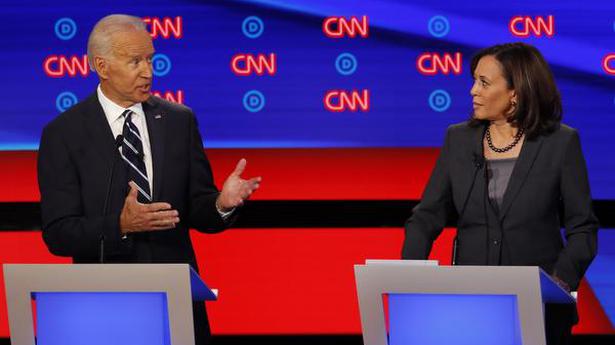 Joe Biden named California Senator Kamala Harris as his running mate on August 11, making history by selecting the first Black woman to compete on a major party’s Presidential ticket and acknowledging the vital role Black voters will play in his bid to defeat President Donald Trump.

A swift response from the fire fighting team at Calicut International Airport was crucial in averting a major tragedy and minimising fatalities after last Friday’s crash of Air India Express flight IX-1344.

The Health Ministry said on Tuesday that an expert committee on vaccine administration, under the chairmanship of NITI Aayog member V.K. Paul, will meet on August 12 to consider the logistics and ethical aspects of procurement and administration of COVID-19 vaccine.

The Central Industrial Security Force (CISF) will deploy more personnel with “working knowledge of the local language” at airports to deal with passengers. The move follows DMK MP Kanimozhi’s complaint that a CISF officer at Chennai airport had asked her if she was Indian after coming to know that she was not conversant in Hindi.

The stand-off on the border with China in Eastern Ladakh is likely to go longer and the Army is prepared for the long haul through the winter, Chief of Defence Staff (CDS) Gen. Bipin Rawat told the Public Accounts Committee (PAC), a defence source said on Tuesday. The PAC meeting was held on Monday to discuss issues related to the Siachen glacier.

The shut down of hi-speed Internet in Jammu and Kashmir was debated between MPs of the BJP and Opposition for two hours at a meeting of the Parliamentary Standing Committee on Information and Technology on Tuesday, sources said.

“Not one of our MLAs have met or spoken with any BJP leaders. The Opposition [BJP] may have tried to do politics seeing the situation and take advantage of the fault lines. I repeat, not one of our MLAs spoke to them,” Mr. Pilot said in an interview to The Hindu.

The Common Law Admission Test (CLAT) for both undergraduate and postgraduate candidates for 2020 will be held on September 7 from 2 to 4 p.m., a communique from the Consortium of National Law Universities said on Tuesday. The CLAT 2020 was scheduled to be conducted in May earlier this year but was postponed due to the coronavirus (COVID-19) pandemic and subsequent lockdown.

The Central Bureau of Investigation (CBI) told the Supreme Court on Tuesday that both the Maharashtra and Bihar governments make a “strong case” for the Central agency taking over the probe into the death of actor Sushant Singh Rajput.

Speaking at an event marking the completion of three years in office as Vice-President and Chairman of Rajya Sabha, M. Venkaiah Naidu said on Tuesday that the functioning of the Rajya Sabha has shown certain “winds of change”, with consistently higher level of productivity and increased legislative output over the last few sessions. The attendance in the meetings of the Committees of the Upper house has also for the first time crossed the 50% mark, he added.

A majority of the young women who participated in a recent Population Foundation of India (PFI) survey in Bihar, Rajasthan and Uttar Pradesh reported that they were not able to sufficiently access sanitary pads during the COVID-19 lockdown.

JOB: Software Quality Analyst I At Bentley | Electronics For You