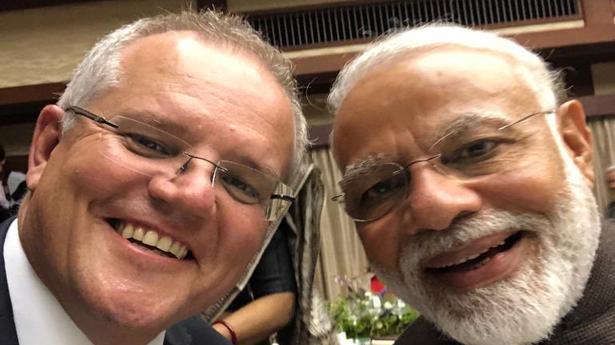 Australia joins wholeheartedly in its celebration of independence and extends our warm congratulations to the people of India, the PM said.

Describing India as a “longstanding friend” of Australia, Prime Minister Scott Morrison on Friday sent a special message of trust, respect and friendship to Indians across the world ahead of the country’s 74th Independence Day.

Mr. Morrison said the “deep friendship” between Australia and India was about more than trade and diplomacy.

“Founded on Bharosa (trust) and Samman (respect) — it is a friendship with depth, and marked by democracy, defence cooperation, diaspora and Dosti (friendship), ” the Prime Minister said.

“Australia joins wholeheartedly in its celebration of independence and extends our warm congratulations to the people of India,” he said.

Referring to the ongoing COVID-19 pandemic, Mr. Morrison said that while this year’s celebrations will look different and many of the traditional gatherings would not take place, the two sides can draw strength from their shared values.

“As I said during the President Kovind’s visit to Australia : Our cultures might be different, but we believe in similar things. We believe in the supremacy of the ballot-box in our national life; in the rule of law; in institutions that safeguard rights; and the responsibility of free people to build a better world,” Mr. Morrison said in a statement.

“It is because of our shared values, interests, and objectives that Prime Minister (Narendra) Modi and I announced the historic elevation of bilateral relations to a Comprehensive Strategic Partnership in June this year,” he said.

Mr. Morrison said the bilateral partnership is geared for the common good of the region and the global community, asserting that this will be critical as the two countries work to overcome the health, social and economic impacts of the COVID-19 pandemic.

“We know people are the living bridge between our countries: as students; skilled workers; or joining family, people of Indian heritage have enriched this country. India is now our biggest source of migrants and their presence has contributed to Australia becoming the most successful multicultural nation on earth,” he said.

“I am delighted to send my best wishes to all Indian-Australians in NSW who are celebrating Indian Independence Day. This important day marks the founding of India as a sovereign state. Indians everywhere can be proud that India is now a respected global player and the world’s largest democracy,” Berejiklian said.

She said that many Indians were living in New South Wales and the State was richer and all the more vibrant for their presence.

“Indian-Australians are also appreciated for being responsible fellow citizens, and the NSW Government commends them for so diligently supporting the measures that are countering the spread of COVID-19,” she said, adding that, “I especially thank the Indian community organisations for reaching out to people in need during the COVID-19 pandemic.”

Sport Newsresults.in - September 23, 2020
0
Simona Halep is heavily favoured to add a second French Open title to her Grand Slam cabinet, brimming with confidence on the back...

Fauci tells Congress the U.S. could have enough coronavirus vaccine doses for every American...