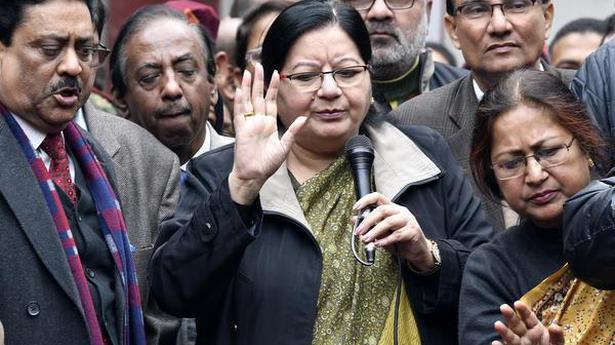 Assessment should be linked to funding incentives, no grants given for Jamia centenary: V-C

Jamia Millia University scored a total of 90% in a self-assessment exercise, based on annual targets set by each university under performance parameters determined by the Centre. The assessment should be linked to financial incentives to make it more effective, Jamia’s Vice-Chancellor Najma Akhtar told The Hindu on Friday.

Jamia, which has been in the spotlight for police violence and riots on campus last December, achieved the highest score for 2019-20, followed by Rajiv Gandhi University in Arunachal Pradesh, and Jawaharlal Nehru University in New Delhi. However, the Education Ministry (formerly the Ministry of Human Resource Development or MHRD) notes that this is an internal assessment, not a ranking, as the targets are self-determined and not comparable across universities.

“It may not be a ranking of the quality of a university like the NIRF [National Institutional Rankings Framework]. But it is ranking of a university’s ability to reach pre-set targets. The Ministry makes sure that those targets are not too low,” said Dr. Akhtar. At the beginning of each year, universities set their own targets on various parameters, including student intake and diversity, faculty strength, research and patents, and financial management.

“Halfway through the year, the CAA [Citizenship Amendment Act protests] happened, and put us at a disadvantage for no fault of ours. COVID happened to everyone, but we were the worst affected by CAA, and we still managed to keep going. We did not shut the university, we kept classes and research going. Research is our main strength at Jamia,” she said, adding that the university had met the challenge of COVID-19 by training all its 800 faculty in online teaching methods and use of digital library resources as soon as the lockdown was announced.

Dr. Akhtar felt that the assessment would be more effective if it were linked to UGC grants or other funding incentives. “Our grants are very weak. We did not even get any grants for our centenary celebrations this year,” she said. Looking ahead, her top priority is to obtain funding, probably through a loan from the Higher Education Financing Agency, to build more hostels. “Many students are not able to take admission because of the lack of hostels. Most of our girls, and even our boys, do not feel safe living off the campus, given the current situation,” added the V-C.

At the other end of the scale, the Central University of Himachal Pradesh (CUHP) achieved a score of only 27%, and is glad that funding is not dependent on the assessment. Only the Indira Gandhi National Tribal University in Arunachal Pradesh posted a lower score.

“We have no permanent infrastructure yet, we are running out the university out of a few rented buildings and a few buildings given temporarily by the State,” CUHP registrar Sanjiv Sharma told The Hindu. Although the university was established in 2010, land for its campus has not yet been allotted largely due to political disagreements on its location, according to Dr. Sharma.

Having finally agreed on a dual campus, a ₹500 crore project proposal has now been sent to the Education Ministry despite some land still awaiting an environment clearance. The university is awaiting sanction from the Centre, despite its poor performance in the assessment exercise.

“Without any permanent buildings, how do we even do something as basic as faculty recruitment? This is the biggest issue,” said the Registrar. The university has a student strength of 1,500 in 25 departments, with 135 faculty members, 70 of whom were hired over the past year. “Once we are able to set up our own campus, we can focus on the rest of the assessment,” he said.

Delhi may have 8 months of 32°C average temperature by 2100: WEF study

Fauci tells Congress the U.S. could have enough coronavirus vaccine doses for every American...