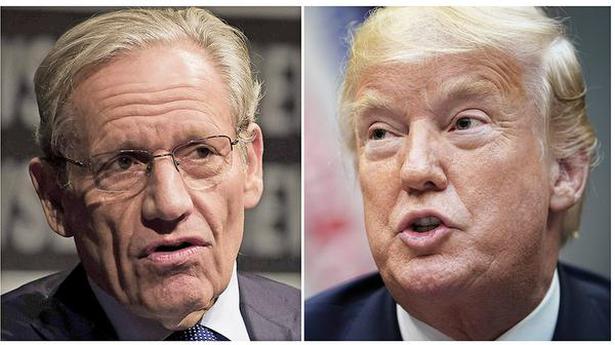 Such a revelation, if true, could shake up great power politics and inflame the arms race.

Bob Woodward’s explosive new book on President Donald Trump has sent military analysts worldwide scrambling over a boast Mr. Trump made to the veteran Washington journalist of a potentially nuclear weapons system that “nobody’s ever had.”

Mr. Trump appeared to disclose top-secret defense information in one of 17 on-the-record interviews he gave for Mr. Woodward’s just-released book Rage, about the U.S. leader.

Mr. Trump says his government has built a weapon system that no one else, not even the leaders of Russia and China, knows about, and seems to say it is “nuclear”.

Such a revelation, if true, could shake up great power politics and inflame the arms race.

But the 54-word audio interview clip from December 5, 2019 that Mr. Woodward released with the book obfuscates as much as it exposes, mainly because when saying “nuclear” Mr. Trump breaks off mid-word, as if he is correcting himself, and then changes to “a weapons system.”

Mr. Woodward said he had confirmed separately with sources that the United States indeed has a new secret weapon, but did not say whether it was nuclear or not.

But arms experts say they are not sure what Trump was talking about, or whether it was one of the hollow boasts he is known for.

Hans Kristensen, director of the Nuclear Information Project at the Federation of American Scientists, says it could be a low-yield nuclear warhead, the W76-2, that was deployed for the first time on a nuclear submarine in January, a month after Mr. Trump mentioned it to Mr. Woodward.

Cheryl Rofer, another nuclear scientist, says it could refer to an all-new warhead just under development, the W93, first revealed by the Pentagon earlier this year.

Others think Mr. Trump did not mean nuclear at all. The boast came in the same period that Russia and China had appeared to take a lead in the development of hypersonic glide vehicles, missiles currently almost impossible to defend against.

Three weeks after Trump gave the interview, Russia announced its first Avangard hypersonics had been put into service.

On January 8 Mr. Trump declared the U.S. was also building hypersonics, and in the following months he branded it the “super-duper missile.”

“We have one 17 times (the speed of sound). And it’s just gotten the go-ahead … Fastest in the world by a factor of almost three,” he said on May 15.

But others aren’t sure Mr. Trump wasn’t making it all up.

“It’s always risky to parse only a few words from Trump,” said Ms. Rofer. “He misunderstands so much and lies so much. ‘Nobody’s ever had’ is one of his trademark brags.”

“I’ll have to refer you to the White House to clarify what the President meant in his remarks,” said a spokesperson, Lt. Col. Robert Carver.

Watch | All about the Armenia-Azerbaijan clashes

Church always a source of strength for me: Kamala Harris

Louisiana must prepare for Zeta while still recovering from two hurricanes, governor says

USA News Newsresults.in - October 26, 2020
0
The stakes in the Supreme Court battle are immense and come at a pivotal time in American politics in the run up to an...

Louisiana must prepare for Zeta while still recovering from two hurricanes,...

Senate to confirm Trump’s Supreme Court nominee a week ahead of...