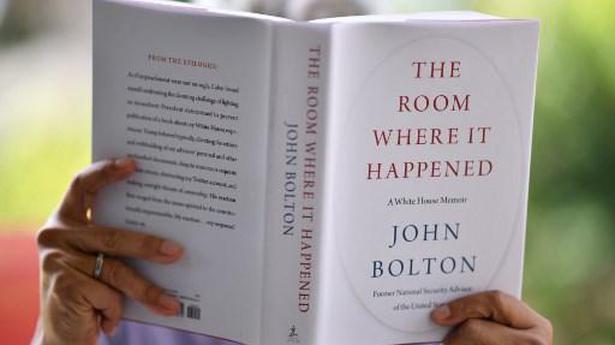 The Times said the department had convened a grand jury to examine whether Bolton illegally published classified information in his book released in June.

It said publisher Simon & Schuster had been subpoenaed for communications relating to the book, “The Room Where it Happened,” which depicted Bolton’s former boss as reckless and corrupt, and supported the charges on which Trump was impeached in December.

After the White House failed to block the book’s publication, Trump demanded Bolton, a hawkish veteran diplomat, be investigated.

“Bolton broke the law and has been called out and rebuked for so doing, with a really big price to pay,” Trump tweeted on June 20.

Washed up Creepster John Bolton is a lowlife who should be in jail, money seized, for disseminating, for profit, highly Classified information. Remember what they did to the young submarine sailor, but did nothing to Crooked Hillary. I ended up pardoning him – It wasn’t fair!

The Justice Department and Simon & Schuster declined to comment. Bolton’s attorney Charles Cooper said they were aware of the subpoena reports.

“Ambassador Bolton emphatically rejects any claim that he acted improperly, let alone criminally, in connection with the publication of his book,” Cooper said in a statement.

A case against Bolton would focus on his claim that his manuscript had passed through a pre-publication national security review and claims by critics that it did not complete that review.

Cooper said before publication that it had undergone a line-by-line review and was cleared by a senior White House national security official.

“Gambled with the national security”

The judge that rejected the White House push to block the book — partly on grounds that copies were already widely distributed — warned that Bolton had “gambled with the national security” of the country and exposed himself to civil and criminal liability.

Around the same time Paul Nakasone, the director of the National Security Agency, said he had “identified classified information” in the manuscript in a pre-publication review.

“Compromise of this information could result in the permanent loss of a valuable SIGINT [signals intelligence] source and cause irreparable damage” to US intelligence, Nakasone said, without specifying which information.

“The type of classified information in these passages is the type of information that foreign adversaries of the United States seek to obtain, at great cost, through covert intelligence collection,” he said.

The Times said the Justice Department debated whether to open an investigation of Bolton with some arguing that Trump’s comments in June would make it appear like political retribution.

Donald Trump accuses China, India and Russia of not taking care of their ‘filthy air’

Final presidential debate: Not my fault, but I take full responsibility, says Trump on COVID-19

USA News Newsresults.in - October 23, 2020
0
The ruling marks a significant development in a months-long legal fight between the companies and the state of California, which in May sued Uber...

Delhi Newsresults.in - October 23, 2020
0
The air quality of Delhi, Gurugram and Noida, which are part of the NCR (National Capital Region), was in the “very poor”...