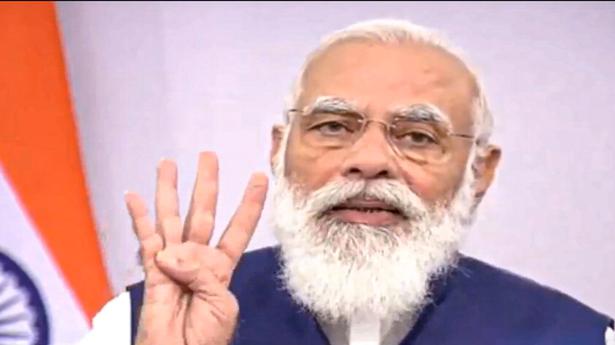 Articulating an inclusive vision for the world and India’s role in manifesting it, Prime Minister Narendra Modi asked the United Nations General Assembly (UNGA) how long India would be kept out of the top U.N decision making bodies. He assured the world of the adequate supply of vaccines and highlighted India’s contribution to UN peacekeeping mission and its non-exclusive foreign policy, making the case for India playing a leading role in the U.N.

Mr Modi who spoke in Hindi and delivered the first speech at the UNGA debate on Saturday, said the problems and solutions of the world in 1945 were quite different from today. “Today we are in a completely different era,” he said, asking if the character of an institution from those times is even relevant today.

He said the U.N. enjoyed “unparalleled” respect in India but Indians were concerned whether the reform process would “ever reach its logical conclusion.”

“For how long will India be kept out of the decision-making structures of the United Nations?” Mr Modi said, in a reference to India’s long-standing quest for a permanent seat at the United Nations Security Council (UNSC).

Mr. Modi questioned the sufficiency of the U.N’s response on issues such as terrorism, refugee crises and the coronavirus pandemic.

“Where is the United Nations in this joint fight against the pandemic? Where is its effective response?” he asked.

“India’s vaccine production and delivery capacity will be used to help all humanity in fighting this crisis,” he said. “India will also help all the countries in enhancing their cold chain and storage capacities for the delivery of the vaccines.”

Mr Modi highlighted some of India’s contribution to the U.N. and said that it was a basis for Indians wanting an “expanded role” in the organization.

“When we were strong, we were never a threat to the world, when we were weak, we never become a burden on the world,” Mr Modi said.

He said the idea of ‘Vasudhaiva kutumbakam’ [the world as one family] was in resonance with the U.N.’s founding ideals and said Indian troops had participated in about 50 U.N. peacekeeping missions.

He spoke of India’s foreign policy  as being driven by the interests of “the whole [of] humankind and not about its own vested interests.” Mr. Modi specifically mentioned India’s Neighbourhood First Policy, the Act East Policy and its views towards the Indo-Pacific Region.

Presumably in a message to the United States as well as China, Mr Modi said , “Any gesture of friendship by India towards one country is not directed against any third country.”

“When India strengthens its development partnership, it is not with any malafide intent of making the partner country dependent or hapless,” he said. This was  presumably an oblique reference to China’s model of infrastructure financing in the Indo-Pacific which has led to several countries falling into debt-traps with Beijing.

Mr Modi thanked member states for trusting India with a non-permanent seat at the Security Council starting January 2020 and said India will bring its developmental experience to the job. He outlined his administration’s official record in areas such as financial inclusion, health care and targets to eradicate tuberculosis (by 2025) and other development goals. Mr Modi also mentioned that India had 26 weeks of paid maternity leave and was promoting the rights of transgendered persons.

“In its journey towards progress, India wants to learn from the world as well as share its own experiences with the world,” he said.