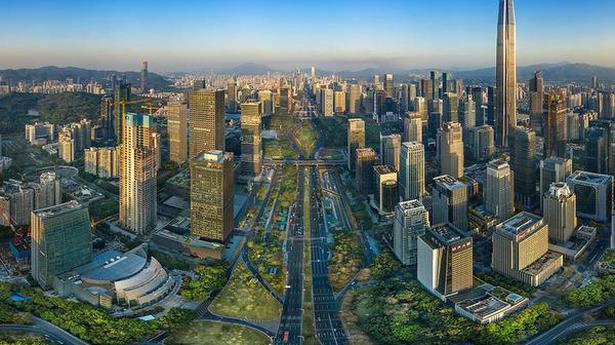 As soon as you enter the gleaming lobby of the Tencent Binhai Mansion, a twin skyscraper-edifice that serves as the headquarters of China’s most well-known tech giant, attendants, dressed in white lab coats, converge on visitors. They ask how you can be helped, before ushering you into a small 3D-exhibition hall that abuts the lobby.

Every inch of the hall, including its ceiling and floor, are covered with screens, displaying images and numbers showcasing the all-pervasive reach of Tencent, and in particular of its WeChat ecosystem that powers China today, offering everything from social media messaging and mobile payments to e-government services. Today, WeChat is also serving as a platform for the official health code service, a tracing app that has played a key role in China’s controlling of the COVID-19 pandemic at home, at least for now.

If the lab coats, sliding doors and flashing lights at Tencent HQ all seem very Star Trek, there is a reason for the elaborate messaging. It is aimed at showing the company’s role in China’s evolution from the world’s workshop to a tech power. And it is no accident that Tencent is headquartered in Shenzhen, a city that has, for four decades, been at the cusp of driving change in China. On October 14, China marked the 40th anniversary of the setting up of its first Special Economic Zone (SEZ) in Shenzhen, a key step in China’s economic reforms and opening up process that would also transform a provincial backwater, whose only claim to fame then was serving as the last stop on the mainland on the Canton (Guangzhou)-Kowloon rail, before it entered then British-controlled Hong Kong.

In 1978, at the start of the reforms process, China’s GDP was $149 billion, not much greater than India’a $140 billion. Its GDP per capita of $156 was less than India’s $203. Fast-forward four decades, and it is now five-times India’s, while the city of Shenzhen alone has a $400 billion GDP, which overtook Hong Kong’s in 2018 and is about the same as Maharashtra’s, India’s biggest state economy.

Experimentation has been key to Shenzhen’s success, and it is still the mantra that drives its firms, big and small. Up the road from Tencent on Binhai Boulevard is the company Royole, a seven-year-old Shenzhen start-up that manufactures foldable electronic displays. “Innovation is at the heart of the Shenzhen spirit,” explained Thalia Cheng, a manager at one of its Shenzhen showrooms, in a conversation last November, as she outlined the company’s next big plan — weaving in electronic displays on clothes and handbags (Louis Vuitton is one of their customers).

Ms. Cheng, and many in Shenzhen, see the city’s access to a large pool of trained and talented labour as one reason behind its rise, both 40 years ago and today, when it is looking to transition from workshop to innovator. If it was the millions of rural workers who descended on this city in the 1980s seeking jobs that offered a way out of rural poverty, today, it is university graduates seeking a fortune in China’s tech sector.

But 40 years on, as they embark on their Shenzhen adventures, a remarkably different world awaits them. If the success story of the world’s workshop coincided with the start of the era of globalisation, China’s tech giants are finding a much more frosty reception today, with much of the world, including India, now reassessing how it wants to do business with China Inc. No surprise that President Xi Jinping, speaking in Shenzhen on the October 14 anniversary, warned of a turbulent world and unprecedented global challenges.

Yet, the changes abroad are, in a sense, reacting to changes within China too. If decentralisation and a retreat of the party-state paved the way for reforms and experimentation in the 1980s, today, the Communist Party is seeking to exert ever greater sway over how even private tech companies are run (all of which, incidentally, are mandated to have internal Party units).

This strange dichotomy was on display outside the Shenzhen Stock Exchange one November morning, a building known for the distinctive statue of two giant charging bulls that stand at its entrance, a symbol of the city — and the country — embracing the market. And just across the square, an electronic screen flashed a banner in bright red, showing a waving flag of the Party and a slogan urging everyone to abide by the values of Mr. Xi’s signature slogan, called ‘Socialism with Chinese Characteristics for a new era’. Only in Shenzhen.

China gears up for ‘strategic period’

USA News Newsresults.in - October 30, 2020
0
The car sports a red, black and white color scheme, the same colors as the Chicago Bulls. Jordan played the majority of his NBA...

International Newsresults.in - October 30, 2020
0
While many Indian Americans are campaigning vigorously for Democratic nominee Joe Biden, several others are making strenuous efforts to keep Donald Trump in...