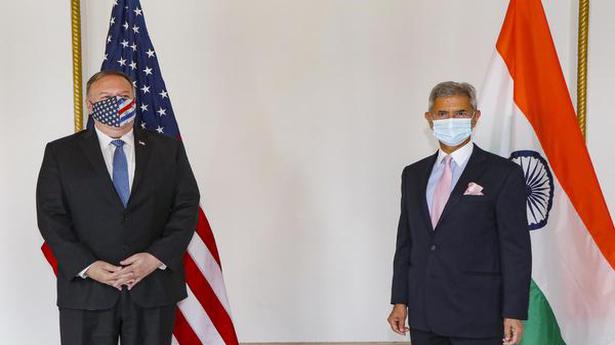 A senior State Department official said the India-China situation along the Line of Actual Control will “certainly” and “probably” be discussed when U.S. Secretary of State Mike Pompeo and Defense Secretary Mark Esper meet External Affairs Minister S. Jaishankar and Defence Minister Rajnath Singh in New Delhi next week for the third edition of the 2+2 ministerial.

“Certainly, I think the situation on the Line of Actual Control will be – will probably be discussed at some point, and we’re watching the situation closely. I think both sides have expressed a desire to de-escalate violence,” Deputy Assistant Secretary David Thompson told reporters on a briefing call on Thursday afternoon.

He did not confirm whether BECA (Basic Exchange and Cooperation Agreement) –a geospatial cooperation agreements between the U.S. and India – would be signed at the 2+2 meeting.

“We’re in the process of finalizing a lot of the discussions right now, and so I know that BECA and other agreements are in the works,” Mr. Thompson said in response to a question on BECA and a maritime information sharing agreement between the two countries.

Also read | India will be most consequential partner for U.S. in Indo-Pacific this century: U.S. Defence Secretary Mark Esper

“ I’m not going to, I think, commit to anything right this minute, but we do expect to have several items highlighted as we go through the trip,” he said.

The dialogue will focus on “ global cooperation, on pandemic response, and challenges in the Indo-Pacific: economic space and energy collaboration, people-to-people ties, and defense and security cooperation,” according to Mr. Thompson.

On the question of this meeting being held just a week before the U.S. elections, Mr. Thompson said it was scheduled to be held earlier but was postponed due to the pandemic.

“As I noted in the – at the top, one of the topics of discussion, a very important topic of discussion, will be COVID-19 response, and so obviously now is a good time to do that.”

On a question about whether the spouses of Mr. Pompeo and Mr. Esper would be accompanying them to India and what resources were being used for this during the pandemic, an official said they did not have “anything to say about the minor details” of who will be in the traveling party.

After his visit to New Delhi, Mr. Pompeo will travel to Colombo, Male and Jakarta. In Sri Lanka , Mr. Pompeo will present options for Sri Lanka to partner with the U.S. on economic development (presumably as an alternative to a Beijing-led process).“In the interest of strengthening our longstanding partnership with Sri Lanka and reinforcing our long-term commitment to the region, we encourage Sri Lanka to review the options we offer for transparent and sustainable economic development in contrast to discriminatory and opaque practices,” Mr. Thompson said.

“We urge Sri Lanka to make difficult but necessary decisions to secure its economic independence for long-term prosperity, and we stand ready to partner with Sri Lanka for its economic development and growth.”

Looking to travel to pocket-friendly places within the country? Here’s your guide

Looking to travel to pocket-friendly places within the country? Here’s your...