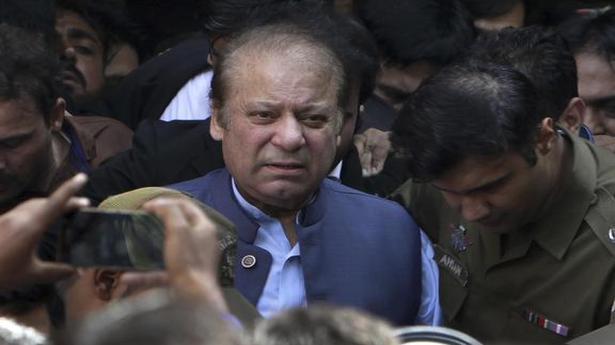 The case was approved against Mr. Sharif and other officials for illegally purchasing 73 high-security vehicles for the security of foreign dignitaries.

Pakistan’s anti-corruption body has slapped a fresh corruption case on deposed Prime Minister Nawaz Sharif, compounding the legal woes of the embattled Opposition leader who has frequently attacked the powerful military as well as the government.

Sharif, the 70-year-old supremo of the Pakistan Muslim League (Nawaz) who was ousted from power in 2017 by the Supreme Court on corruption charges, is currently in London for medical treatment.

On Thursday, a total of 11 cases were approved at NAB’s Executive Board Meeting (EBM) presided over by its chairman, retired Justice Javed Iqbal.

According to the NAB, a fresh case was approved against Mr. Sharif along with Mr. Chaudhry, Mr. Sultan and Mr. Fawad for illegally purchasing 73 high-security vehicles for the security of foreign dignitaries.

They are accused of favouritism and illegal use of vehicles, causing huge financial loss to the national exchequer.

The EBM also approved a case against Ahsan Iqbal and Mohammad Ahmed, contractor/owner of private firm Ahmed and Sons, for increasing the scope of the Sports City project in Narowal from Rs 30 million to Rs 3 billion by abusing the authority .

They are accused of illegally providing the funds of the federal government to provincial government projects after the 18th Amendment by using personal influence, which inflicted huge losses on the national exchequer.

The case against Mr. Iqbal was approved two days after he had said in a private TV talk show that the NAB had been investigating the Narowal Sports City case against him for the last two-and-a-half years but did not file a reference.

Mr. Sharif is already facing several cases of corruption and misuse of authority which he has declared as a result of political vendetta by the current government led by Prime Minister Khan.

The approval of fresh cases followed a recent speech by Prime Minister Khan that the Opposition would see a different Imran Khan , which was interpreted as a threat to arrest more opposition leaders and court cases.

Apart from Mr. Sharif and his close aides, the NAB approved cases worth billions of rupees of alleged corruption against several officials and businessmen for causing losses to the country in different projects.

Days before the July 2018 general elections, Mr. Sharif was convicted in the Avenfield properties case and sentenced to 10 years in prison. His daughter Maryam was sentenced to seven years in prison for abetment and his son-in-law Captain (retd) Mohammad Safdar to one year.

The IHC later granted bail to Mr, Sharif, Ms. Maryam and Safdar. Mr. Sharif, after his conviction in the Al-Azizia case, was sent to jail but released for eight weeks on medical grounds. The bail-granting order lapsed while the former premier was in London.

The IHC had in September fixed the appeals against conviction of Mr. Sharif in Al-Azizia and Avenfield cases. After hearing the pleas, the court rejected Mr. Sharif’s applications seeking hearing in absentia and issued his non-bailable arrest warrants.

The court then issued his proclamation giving the former premier final opportunity to join the proceeding before confiscating his properties.

Separately, an accountability court in Islamabad has already confiscated movable and immovable properties of Ms. Sharif because he absconded in the Toshakhana case, which is about alleged corruption in purchase of vehicles.