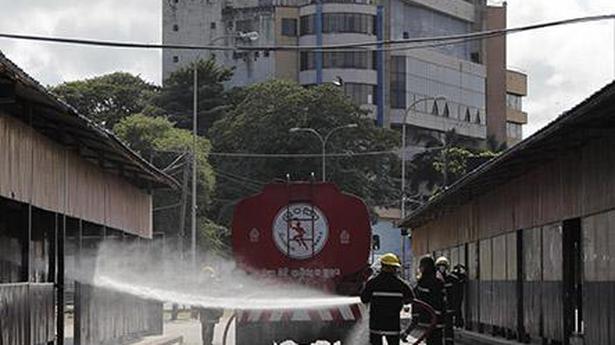 Sri Lanka’s COVID-19 cases continued to surge, taking the total number to nearly 8,000, as more contacts linked to two new clusters identified this month were tested for the coronavirus over the weekend. The total number of deaths rose to 16.

On Monday, authorities said Sri Lanka’s Parliament would be shut for two days for disinfection, after a member of the Special Task Force, on security duty, tested positive. The development comes days after the House convened for the debate on and subsequent passage of the controversial 20th Amendment to the Sri Lankan Constitution with nearly all the 225 legislators attending the session.

Meanwhile, police expanded its “quarantine curfew” orders to include several localities in and around Colombo this weekend. Health authorities said there was no evidence yet of community transmission, as all positive patients have been traced to one of the two latest clusters — at a garment factory and a fish market in Colombo — or their immediate contacts. No isolated case has been reported outside of these two key clusters, to be termed as a community spread, according to Dr. Sudath Samaraweera, Chief Epidemiologist at the Ministry of Health.

However, the Government Medical Officers Association (GMOA) — a trade union of medical professionals in the public sector — warned that Sri Lanka is on the “verge of” community transmission of COVID-19 and any neglect on the part of the authorities could spell dangerous consequences.

As the number of COVID-19 positive cases continues rising, Sri Lanka’s coronavirus infrastructure, including the army-run quarantine centres, appeared to be under pressure.

On Monday, Army Commander Lieutenant General Shavendra Silva, who heads the National Centre for the Prevention of COVID-19, told media that first-tier contacts of COVID-19 patients will henceforth be asked to self-quarantine themselves in their homes, instead of being taken to quarantine centres.

After the global pandemic hit Sri Lanka in March, the country went into a stringent lockdown for about two months, in addition to closing its borders. The country’s early measures to contain the pandemic drew high praise including from the World Health Organization, allowing authorities to go ahead with the general elections in August.

However, the recent wave appears to have caught the country unawares. Health authorities are yet to identify the source of this outbreak, identified on October 4, that has since spread to 19 of the island’s 25 districts, according to data published by the Epidemiology Unit.

40 million COVID-19 vaccine doses to be available by the end of the year: White House

U.S. pushes ahead with executions

USA News Newsresults.in - November 21, 2020
0
These were the nicknames that David Deutchman earned by volunteering for 14 years at Children's Healthcare of Atlanta at Scottish Rite. Every Tuesday and...

USA News Newsresults.in - November 21, 2020
0
(CNN) — One way to get to know the real nature of the American South is to travel its highways and byways and view...