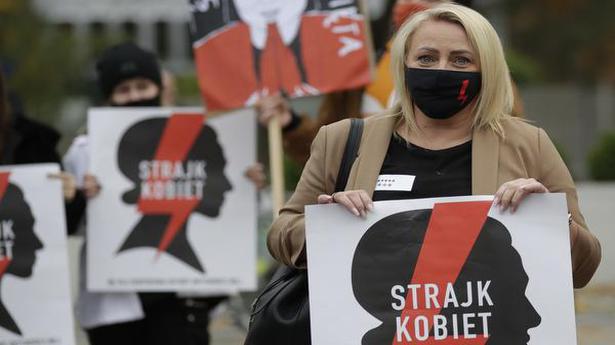 Jaroslaw Kaczynski, who is also the deputy prime minister in charge of security and is widely seen as the country’s real powerbroker, criticised the “nihilism” and “vulgarity” of the protests.

The influential leader of Poland’s ruling party on Tuesday criticised protests against a near-total ban on abortion as an attempt to “destroy” the nation and rallied party members to defend Catholic churches.

Jaroslaw Kaczynski, who is also the deputy prime minister in charge of security and is widely seen as the country’s real powerbroker, criticised the “nihilism” and “vulgarity” of the protests.

“I call on all members of PiS (Law and Justice) and all those who support us to defend Polish churches at any cost,” Mr. Kaczynski said in a televised address.

He said the protests “aim to destroy Poland”.

Poland has seen six consecutive days of demonstrations against a ruling by the constitutional court which, when published, will rule out abortions in all cases except rape and when the life of the mother is at risk.

Poland, a country of 38 million people, already has some of the most restrictive abortion laws in Europe and fewer than 2,000 abortions are carried out per year.

It is estimated that some 200,000 Polish women travel abroad for terminations, including to neighbouring Ukraine and Germany, or have illegal abortions.

Poland is a predominantly Catholic country but the influence of the Catholic Church is waning among younger generations and some of the protests have focused on churches across the country.

Prime Minister Mateusz Morawiecki earlier on Tuesday said that “acts of aggression, barbarism and vandalism are absolutely unacceptable,” and warned protesters that any violence could lead to an “escalation”.

One of the protests on Tuesday was in the parliament.

Centrist and left-wing lawmakers held up placards and shouted pro-choice slogans at Kaczynski, after the conservative speaker of parliament compared the protest symbol of a red lightning bolt to Nazi imagery.

The session was suspended amid angry scenes.

Opponents of the ruling party say it puts women’s lives at risk by forcing them to carry unviable pregnancies but supporters insist it will only stop the abortion of foetuses diagnosed with Down Syndrome.

The ruling cannot be appealed but only comes into force if it is published in the journal of laws.

It is unclear when this will happen and more protests are planned in the coming days.

USA News Newsresults.in - December 3, 2020
0
The campaigns for Republican Sens. David Perdue and Kelly Loeffler recognize that Trump can fire up his supporters for their January 5 elections like...