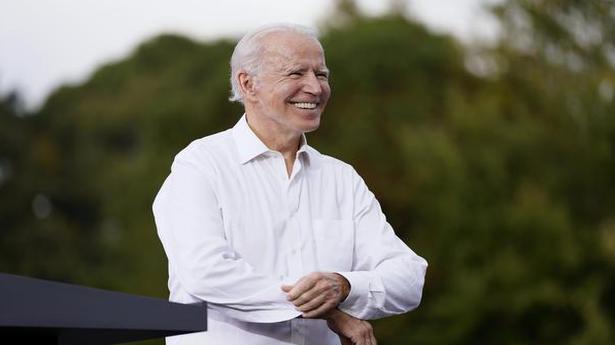 Mr. Biden, who leads President Donald Trump in polls ahead of next week’s election, promised if he wins to “significantly expand” sanctions alongside European allies against “Lukashenko’s henchmen.”

Mr. Biden, who leads President Donald Trump in polls ahead of next week’s election, promised if he wins to “significantly expand” sanctions alongside European allies against “Lukashenko’s henchmen.”

“Although President Trump refuses to speak out on their behalf, I continue to stand with the people of Belarus and support their democratic aspirations,” Mr. Biden said in a statement.

“No leader who tortures his own people can ever claim legitimacy.”

Workers at factories on Monday started a strike after a deadline for Mr. Lukashenko to resign set by Svetlana Tikhanovskaya, who contested him in August elections.

Ms. Tikhanovskaya claims to have won the election but Mr. Lukashenko insists he was the victor and has deployed deadly force against nationwide protests.

Deputy Secretary of State Stephen Biegun in August visited Ms. Tikhanovskaya in Lithuania, where she has fled, and the United States and European Union have joined in sanctions against Mr. Lukashenko associates.

On Saturday, Secretary of State Mike Pompeo called on Ms. Lukashenko to seek the release of a U.S. citizen and voice support for “the democratic aspirations of the people of Belarus,” according to the State Department.

For churchgoers during the Covid-19 pandemic, a deadly lesson from the 1918 flu

USA News Newsresults.in - December 3, 2020
0
Those who refused to adapt to the pandemic reaped the consequences. In Zamora, Spain, "mass gatherings were positively encouraged — and at 3 per...

Delhi Newsresults.in - December 3, 2020
0
The court was hearing a PIL. The AAP government informed the Delhi High Court on Thursday that no night curfew would be imposed...

USA News Newsresults.in - December 3, 2020
0
In less than 12 months, and in a season curtailed by the coronavirus pandemic, Schumacher's fortunes have transformed. With one race remaining, he is...

For churchgoers during the Covid-19 pandemic, a deadly lesson from the...