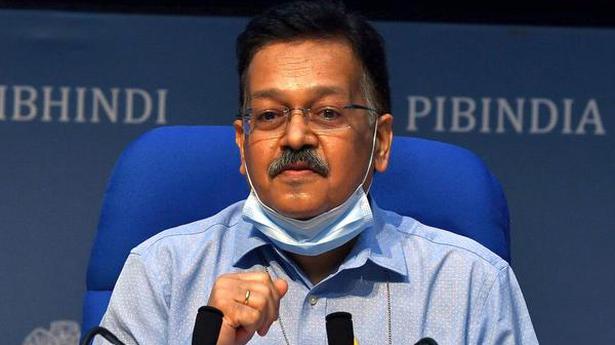 
Union Health Secretary Rajesh Bhushan, on Thursday, reviewed the status of COVID-19 in the States/UT of West Bengal, Kerala and Delhi and their public health response measures. He advised these States/UTs to gear up “testing, tracking & treatment” strategy during the festival season and also asked them to ensure that additional thrust be given to public awareness as well as enforcement of COVID-appropriate behaviours.

The video conference saw the participation of V.K. Paul, member (Health), NITI Aayog, and Director General of ICMR Balram Bhargava, health secretaries from the States/UT among others.

A release issued by the Ministry said Delhi has 29,378 active cases as of Thursday with a fatality rate of 1.76% and a positivity rate of 7.9%.

“5,673 new cases were recorded in the last 24 hours and there has been nearly 46% increase in the new cases over the past four weeks, and the positivity rate over the past four weeks has escalated by nearly 9%. The rising cases were attributed by the Delhi team to social gatherings during the festivities, the deteriorating air quality, increasing incidences of respiratory disorders, and clusters of positive cases at work places,” said the Ministry.

It added that the UT was advised to aggressively ramp up testing, increase RT-PCR tests, focus on contact tracing and effectively enforce isolation of the traced contacts within the first 72 hours.

“Delhi has been advised to focus on containment zones, and strict perimeter control to be implemented as per MHA guidelines,” said the Ministry.

The Secretary said West Bengal has shown a 1% increase in the positivity rate over the last four weeks.

“Darjeeling, Nadia, Medinipur West, Jalpaiguri, Hooghly are the top districts showing increasing trend in cases. Whereas Murshidabad, Nadia, Coochbehar, Kolkata and Darjeeling have registered increase in the weekly deaths last week. The tests per million population (TPM) stand at 41,261 whereas the national TPM is 77,220,” said the Ministry.

No night curfew in Delhi as of now, govt. informs High Court

No night curfew in Capital as of now, govt. informs High Court

‘No fake news:’ Biden and Harris sit down for a ‘very normal’ interview with...

USA News Newsresults.in - December 4, 2020
0
"There couldn't be a more extreme exercise in stark contrast between the current occupant of the White House and the next occupant of the...

International Newsresults.in - December 4, 2020
0
Facebook intentionally created a hiring system in which it denied qualified U.S. workers a fair opportunity to learn about and apply for jobs...