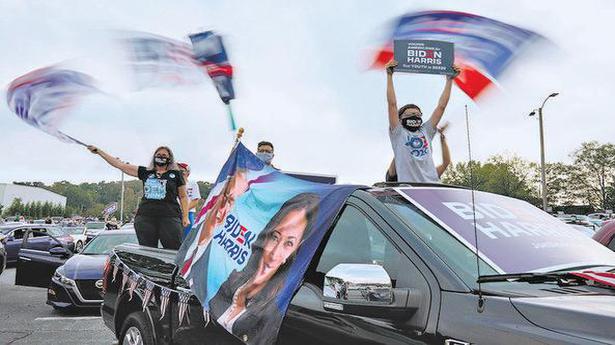 
President Donald Trump and Democratic presidential candidate Joe Biden are set to square off with rallies in key Midwestern States on Friday as a resurgent coronavirus further highlights their sharp differences just four days before the U.S. presidential election.

Even with the United States reaching another daily record in new COVID-19 infections on Thursday, President Trump stuck to his strategy of downplaying its dangerousness and calling for businesses to reopen.

He has also ramped up fear-mongering, warning of rampaging “socialists” and seeking to portray his Democratic challenger as intent on shutting the country down.

Mr. Biden has sought to persuade the few remaining undecided voters that he would provide a steady hand on the wheel and heal America’s “soul,” calling Trump irresponsible.

The two candidates plan to be in three Midwestern States on Friday, with both campaigning in Wisconsin and Minnesota.

Mr. Trump will also travel to Michigan and Mr. Biden also plans to be in Iowa.

Mr. Trump’s wins in Michigan, Wisconsin and Iowa helped propel him to victory in 2016.

But polling averages from the RealClearPolitics.com site show Mr. Biden up in all four of those States, ranging from 6.5 percentage points in Michigan to just one point in Iowa.

Still, Democrats and Republicans alike have repeatedly warned of the unreliability of polls, pointing to Mr. Trump’s shock defeat of Hillary Clinton in 2016 despite surveys showing her to be the clear favourite.

Mr. Trump and Mr. Biden are concentrating their efforts on battleground States that will decide the election in the days before the November 3 polls, and on Thursday both were in the crucial state of Florida.

“They will allow you nothing,” the Republican said.

“We’re never going to lock down again…. We’re open for business,” he said, telling supporters that his own recent bout with COVID-19 proved that it can be beaten. “You know, the bottom line is you get better,” he said.

But the pandemic, which has already taken 2,28,000 American lives, has shown its resilience and is undergoing a long-predicted second wave.

On Thursday, more than 91,000 new U.S. infections were recorded, according to a Johns Hopkins University tally, the highest 24-hour total since the pandemic began.

Mr. Trump, however, did receive good news on Thursday in his argument that he is best placed to bring about an economic recovery.

New figures showed an annual growth rate of 33.1% in the third quarter — a jaw-dropping statistic that reflected the economy’s rebound from such a low base.

Mr. Biden, addressing a socially distanced drive-in event in Broward County, reminded supporters that of all the States there are few as important as Florida in deciding the outcome of tight elections.

Rebuffing Mr. Trump’s central charge, the 77-year-old reemphasised his claim that he would bring responsible leadership after months of the White House downplaying the virus’ danger.

USA News Newsresults.in - December 4, 2020
0
"I speak some Korean," said Grace Pai, in Korean. "It's terrible," Pai added in broken Korean. Pai explained how she and her fellow volunteer,...