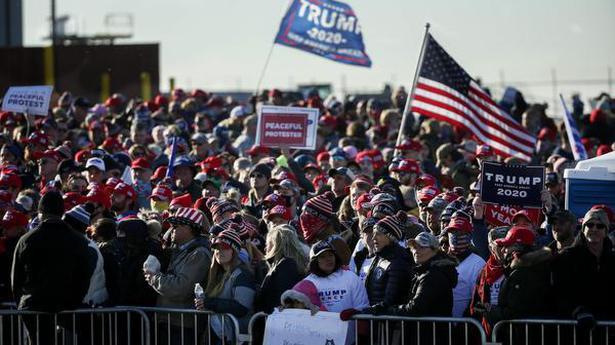 President Donald Trump and Democratic challenger Joe Biden on Friday sought support in Midwestern states where the coronavirus has roared back, with Trump falsely accusing doctors of profiting from COVID-19 deaths while Mr. Biden said Mr. Trump had surrendered to the pandemic.

Mr. Trump criticised Democratic governors who have imposed restrictions that aim to slow the virus’s spread, and said Mr. Biden would prohibit Americans from gathering for holidays or other special occasions if elected. Many of those who came to see him did not wear masks.

“You’ve got to open up your state and you’ve got to do it fast!” Mr. Trump said at a rally in Green Bay, Wisconsin, with just four days to go before the election.

At a later event in Rochester, Minnesota, he greeted hundreds of supporters who were locked out of a rally that was limited to 250 participants by state authorities.

Mr. Trump also trained his ire on the U.S. medical system, falsely saying that doctors are somehow incentivized to drive up the death count.

“Our doctors get more money if someone dies from COVID,” he said in Waterford Township, Michigan.

Mr. Biden accused Trump of “giving up” in the fight against the virus and said he should not attack medical personnel who are treating its victims.

“Unlike Donald Trump, we will not surrender to this virus,” he said at a rally in St. Paul, Minnesota. Supporters, socially distanced in their cars at the state fairground, and honked their horns in agreement. The coronavirus pandemic, which has killed nearly 230,000 people in the United States and cost millions more their jobs, has dominated the final days of the campaign.

A record surge of cases is pushing hospitals to the brink of capacity. The news pushed Wall Street to its worst week since March, undercutting one of Mr. Trump’s main arguments for re-election.

Mr. Trump, who recovered from COVID-19 weeks ago, has played down the health crisis for months, telling supporters in recent weeks that the country is “turning the corner” even as cases surge. Biden has warned of a “dark winter” ahead and promised a renewed effort to contain the virus.

Mr. Biden leads Mr. Trump 52% to 42% in Reuters/IPSOS national opinion polling, partly because of widespread disapproval of his handling of the pandemic. Opinion polls show a closer contest in the most competitive states that will decide the election.

The focus on the upper Midwest underlined the region’s importance in the race. Michigan and Wisconsin were two of the three historically Democratic industrial states, along with Pennsylvania, that narrowly voted for the Republican Mr. Trump in 2016, delivering him an upset victory.

Mr. Biden leads Mr. Trump by 9 percentage points in Michigan and Wisconsin and 5 points in Pennsylvania, according to Reuters/IPSOS polling.

‘Don’t take anything for granted’

Minnesota, which has not voted for a Republican presidential candidate since 1972, is one of the few Democratic states that Trump is trying to flip this year. Biden said his visit was not a sign he was worried about the state, where he has held a steady lead. Mr. Trump was due to visit later in the day.

The pandemic and an extraordinary level of enthusiasm have prompted Americans to vote early in unprecedented numbers.

More than 86 million votes have been cast either by mail or in person, roughly 63% of the total number of votes in the entire 2016 election, according to the U.S. Elections Project at the University of Florida.

In Texas, a traditionally Republican state where polls show Biden and Trump close, more than 9 million people have cast ballots, eclipsing total turnout from 2016, the Texas secretary of state’s office said. Texas is the second state, along with Hawaii, to already surpass its 2016 total.

Mr. Trump has repeatedly claimed without evidence that mail-in ballots are susceptible to fraud, and has more recently argued that only the results available on election night should count.

Early voting data show that far more Democrats have voted by mail, while Republicans are expected to turn out in greater numbers on Tuesday.

This means preliminary results from states like Pennsylvania that do not begin counting mail-in ballots until Election Day could show Trump in the lead before flipping as more Democratic-heavy ballots are added.

Last-minute legal battles have added to the uncertainty.

On Thursday, a federal appeals court said Minnesota’s plan to count ballots that arrive after Election Day was illegal. That ruling came after the Supreme Court allowed North Carolina and Pennsylvania to keep similar deadlines in place.

Separately, a federal judge in Washington ordered the U.S. Postal Service to take extra steps to ensure speedy delivery of mail ballots in areas where service has been slow.

USA News Newsresults.in - December 4, 2020
0
Ratcliffe's piece was just the latest warning from senior administration officials about China's intentions, with some warning of possible military action in Asia and...

Harris on her working relationship with Biden: ‘We are full partners in this process’

USA News Newsresults.in - December 4, 2020
0
"Look, there's not a single decision I've made yet about personnel or about how to proceed that I haven't discussed it with Kamala first," Biden told CNN's Jake...

Trump’s intelligence chief warns China is the greatest threat to US...

Harris on her working relationship with Biden: ‘We are full partners...