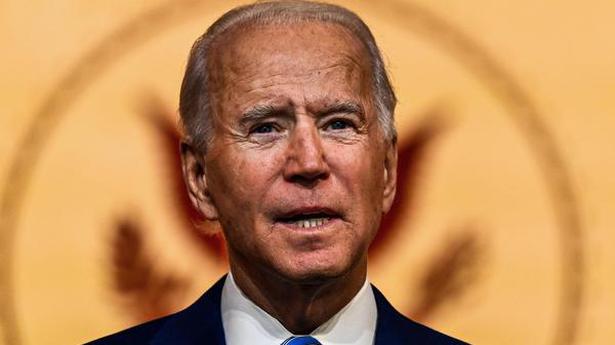 The Times said the Biden administration would seek to extend the duration of “restrictions on Iran’s production of fissile material that could be used to make a (nuclear) bomb” in a new round of negotiations.

U.S. President-elect Joe Biden will insist Iran agrees to new demands if it wants the U.S. to return to a nuclear deal and lift sanctions, The New York Times said on Wednesday.

The Times said the Biden administration would seek to extend the duration of “restrictions on Iran’s production of fissile material that could be used to make a (nuclear) bomb” in a new round of negotiations.

Iran would also have to address its “malign” regional activities through proxies in Lebanon, Iraq, Syria and Yemen in the talks that would have to include its Arab neighbours like Saudi Arabia, the report said.

President Donald Trump unilaterally withdrew from the deal in 2018 and has reimposed crippling sanctions on Iran as part of a “maximum pressure” campaign against the US’s arch enemy.

Mr. Biden, who defeated Mr. Trump at the ballot box last month, said during campaigning that he intends to offer Iran a “credible path back to diplomacy”.

In the interview published on Wednesday, the incoming U.S. President stood by those views, saying: “It’s going to be hard, but yeah.”

“Look, there’s a lot of talk about precision missiles and all range of other things that are destabilising the region,” Mr. Biden was quoted as saying.

But, he added, “the best way to achieve getting some stability in the region” was to deal “with the nuclear program”.

Mr. Biden warned that if Iran acquired a bomb, it would spark a nuclear arms race in the Middle East, “and the last goddamn thing we need in that part of the world is a buildup of nuclear capability”.

“In consultation with our allies and partners, we’re going to engage in negotiations and follow-on agreements to tighten and lengthen Iran’s nuclear constraints, as well as address the missile program,” he said.

Mr. Biden was cited as saying that the U.S. always had the option to international snap back sanctions if need be, and that Iran knew that.

The 2015 nuclear deal — known formally as the Joint Comprehensive Plan of Action, or JCPOA — gave Iran relief from sanctions in return for curbs on its nuclear programme.

In response to Trump’s withdrawal, the Islamic republic has retaliated by rolling back its commitments to the accord.

Iran’s government has offered a cautious welcome to Mr. Biden’s victory, but conservatives have accused it of yielding to what they say is an “illusion” of a change by the “Great Satan” of America.

Alexei Navalny plans to return to Russia after recovery in Germany

All US federal prisons on temporary lockdown ahead of Biden inauguration

USA News Newsresults.in - January 17, 2021
0
The Bureau of Prisons (BOP) announced Saturday that it is securing all institutions "in light of current events occurring around the country.""There is no...

USA News Newsresults.in - January 17, 2021
0
"Let it be known that the office of attorney general has a potential charge that it may utilize," Racine told MSNBC."It's law in DC...

Analysis: People want the Covid-19 vaccine, but the government is failing

All US federal prisons on temporary lockdown ahead of Biden inauguration

Analysis: People want the Covid-19 vaccine, but the government is failing