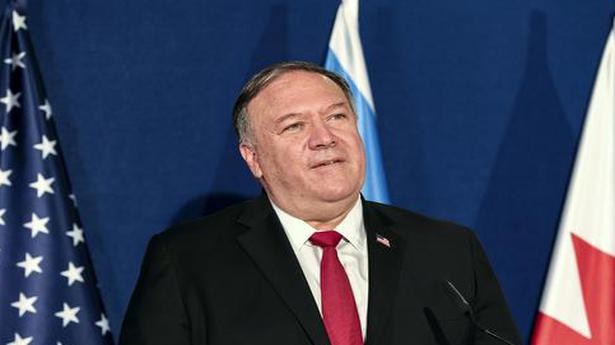 Beijing says Pompeo, others interfered in China’s internal affairs and undermined its interests

China on Wednesday announced sanctions on 28 officials connected to the outgoing Donald Trump administration, including Secretary of State Mike Pompeo, just as the new United States President, Joe Biden, was taking his oath of office.

The Foreign Ministry in Beijing said in a statement it had “decided to sanction 28 persons who have seriously violated China’s sovereignty and who have been mainly responsible for such U.S. moves on China-related issues”.

The list includes Mr. Trump’s trade adviser Peter K. Navarro, who was a key figure behind many of the China-related trade moves; outgoing National Security Adviser Robert C. O’Brien; Assistant Secretary of State for the Bureau of East Asian and Pacific Affairs David Stilwell, who is the top diplomat for the region; and the recently resigned Deputy National Security Adviser Matthew Pottinger, another key figure in Mr. Trump’s China policy. Also on the list were former NSA John R. Bolton and former White House chief strategist Stephen K. Bannon, who both fell out with Mr. Trump while he was in office.

The Ministry said “these individuals and their immediate family members are prohibited from entering the mainland, Hong Kong and Macao of China” and “they and the companies and institutions associated with them are also restricted from doing business with China”.

It described them as “anti-China politicians in the United States” who “out of their selfish political interests and prejudice and hatred against China and showing no regard for the interests of the Chinese and American people, have planned, promoted and executed a series of crazy moves which have gravely interfered in China’s internal affairs, undermined China’s interests, offended the Chinese people, and seriously disrupted China-U.S. relations”.

The announcement came as China and the U.S. clashed over the Trump administration, on its last day, accusing China of committing “genocide” and “crimes against humanity” against its minority Uighur Muslims in Xinjiang. This followed a number of recent measures that have brought relations with China to a low, with both sides clashing over Taiwan, Hong Kong as well as sanctions on Chinese firms.

Mr. Biden, during the election campaign, had also described what China was doing in Xinjiang, where around a million people have been forced to “re-education” centres, as “genocide”. The declaration by the U.S. will likely mean a continuation of sanctions, including a ban on imports of cotton and tomatoes from Xinjiang as well as designations of Chinese officials seen to be involved in the Xinjiang policy.

“After careful examination of the available facts,” Mr. Pompeo said in a statement, “I have determined that since at least March 2017, the People’s Republic of China, under the direction and control of the Chinese Communist Party, has committed crimes against humanity”, including “severe deprivation of physical liberty of more than one million civilians, forced sterilization, torture of a large number of those arbitrarily detained, forced labor, and the imposition of draconian restrictions on freedom of religion or belief, freedom of expression, and freedom of movement”.

He added that China had “committed genocide against the predominantly Muslim Uighurs and other ethnic and religious minority groups in Xinjiang” and “this genocide is ongoing, and that we are witnessing the systematic attempt to destroy Uighurs by the Chinese party-state”.

Coronavirus | Don’t waste the hope of vaccines, warns WHO

‘How much more can we allow the Myanmar military to get away with?’ U.N. envoy asks

Twitter working on a way to ‘undo’ fresh tweets

US could reach herd immunity by summer through vaccinations alone, CNN analysis finds

USA News Newsresults.in - March 6, 2021
0
This week, President Joe Biden said that the US will have enough vaccine for every adult by the end of May, and a CNN...

A Pennsylvania town surprised its UPS driver with a $1,000 gift thanking him for...

USA News Newsresults.in - March 6, 2021
0
Chad Turns delivers for UPS in the small town of Dauphin, Pennsylvania, and is beloved by his customers, said resident Jenny Shickley. When he...

US could reach herd immunity by summer through vaccinations alone, CNN...

A Pennsylvania town surprised its UPS driver with a $1,000 gift...