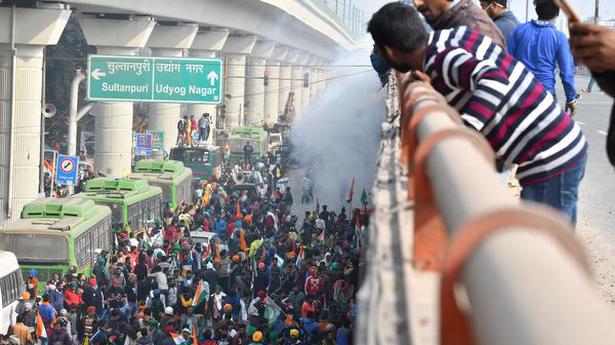 
As farmers’ protest turned violent in parts of Delhi on Republic Day, the Ministry of Home Affairs (MHA) issued orders to temporarily suspend Internet in some areas under a rarely used provision of a British era Act.

The order issued under the Temporary Suspension of Telecom Services (Public Emergency or Public Safety Rules 2017) of the Indian Telegraph Act, 1885 had been issued only twice- in Delhi on December 19 and 20, 2019, at the height of the CAA (Citizenship [Amendment] Act/National Register of Citizens (NRC) protests.

The rules framed in 2017 empower the Union Home Secretary and a State’s Home Secretary to pass directions to suspend the telecom services, including Internet, in an area “due to public emergency or public safety.”

Tuesday’s order said, “In the interest of maintaining public safety and averting any public emergency, it is necessary and expedient to order the temporary suspension of Internet in areas of Singhu, Ghazipur, Tikri, Mukarba Chowk, Nangloi and their adjoining areas in the NCT of Delhi from 12:00 hrs to 23:59 hours on January 26,2021. This has the approval of the Union Home Secretary.” All such orders have to be reviewed by a committee headed by the Cabinet Secretary within five days.

“It was decided that extra paramilitary forces will be deployed in Delhi,” a senior government official said. Mr. Shah skipped the at-home ceremony hosted by the President on the occasion of Republic Day.

Other than the Delhi Police that was present in full force, around 4,500 Central Reserve Police Force (CRPF) personnel had been deployed in the city due to tractor rallies planned by farmers’ unions at designated spots.

The situation turned violent when few farmer groups deviated from the agreed route and marched towards central Delhi. Many were teargassed and beaten at police pickets. One person was killed when his tractor hit a police barricade at Deen Dayal Upadhyay Marg near ITO in central Delhi.

Several farmer groups had been sitting in protest since November 26 at Delhi’s borders against the three farm laws passed by the government in September last.

Life-style Newsresults.in - March 8, 2021
0
Meghan and Harry say their second child is a girl. The two made the revelation in their interview with Oprah Winfrey that aired on...