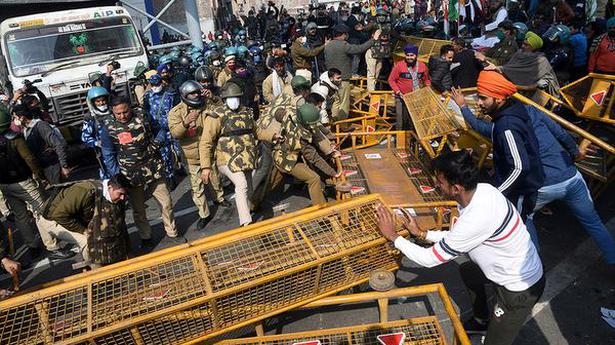 
There are different interpretations of the chaotic events that unfolded in parts of Delhi on Republic Day as farmers who have been camped at the Ghazipur border for over two months now, entered the city, apparently in violation of agreements between police and farm union leaders.

While some observers said the young farmers lost their way on the Delhi-Meerut expressway in the absence of any barricades, others said the idea of going to the Red Fort has been brewing for some time among the younger protesters who grabbed the chance presented to them. Others also point out that a section of farmers, tired and restless of waiting at the border for more than 60 days now, wanted to make a larger point which the leadership failed to take into account.

Senior sources in the Bhartiya Kisan Union felt hoisting the flag of a particular faith at the Red Fort was against the spirit of the protest movement and it would bring the farmers down from the high moral ground they had held vis-a-vis the government.

The events have also raised questions on the leadership in charge of the protest at the Ghazipur border. Over the last few days, a feeling has grown that the All India Kisan Mazdoor Sangathan (AIKMS) and other groups who are protesting on the flyover have a mind of their own even though they had accepted Rakesh Tikait of Bhartiya Kisan Union as their leader during negotiations.

“I have brought this up during meetings several times but the consensus was nobody would defy the common agenda,” said a BKU leader requesting anonymity.

Rajvir Singh, BKU State vice-president said all was well in the morning and the farmers were supposed to take the route decided on Monday night after the official Rajpath parade was over.

“But some of the farmers who had arrived in the last couple of days and were stationed on the flyover suddenly decided to start before the scheduled time after ostensibly they got information from the Singhu border to march towards Delhi. I admit some of our members were also among them and it is definitely a failure of our volunteers,” he said.

He added many of them were not well versed with the exits on the expressway and in the absence of any police, kept driving and once they reached the ITO cut, realised it was an opportunity to drive to the Red Fort.

Delhi Police Head constable Pradeep Kumar posted at the Ghazipur post said they didn’t have orders to stop tractors on Tuesday. “But the leaders failed to keep them on the route they agreed upon on Monday night,” he said. Police sources in Ghaziabad said farmers were given freedom of movement for the Republic Day but they misused it.

“The borders were not sealed on the eve of Republic Day which is a usual practice. The number of tractors was so overwhelming that it was not possible. But their leaders betrayed them,” said a senior officer.

In the evening Rakesh Tikait, a senior leader of Bhartiya Kisan Union said he “condemned the act of some unwanted elements in the parade and regretted the turn of events.”

In a release, he held the Delhi Police/ administration responsible for the clashes as they didn’t put barricades at points where the parade had to take a turn.

“It resulted in some tractors losing their way and gave an opportunity to unwanted elements and groups to spoil the parade. BKU dissociates itself from such elements and would try to figure out those elements,” he said, adding the Union “didn’t believe in violent protests and denigrating the national symbols.”

He also promised that the issue would be discussed in the coordination committee meeting and the responsibility would be fixed.

At the border, Balwinder Singh who is actively involved in serving langar admitted hoisting the flag at the Red Fort was a mistake of some overzealous youngsters.

“The demand of going to the Red Fort was raised during langars and casual discussions. We could understand that having waited for more than two months, youngsters who voted for the BJP wanted to make a point but they were told in clear terms that we have to stick to plan and agenda,” he said. “It has weakened the movement. They did something for which we criticise the party in power,” said Mr Singh who hails from Rampur.

When Rakesh Tikait reached the border to pay homage to Ranveet Singh, the farmer who died during the day when his tractor overturned after hitting a barricade, Rakam Singh an ex-soldier from Meerut shouted “how many more sacrifices would you ask for?”

Mr Tikait responded by saying that the movement “needed peace, not sacrifice”.

Here’s your ultimate guide to Samsung’s smartphone lineup, from the A50 to the Note...

USA News Newsresults.in - March 5, 2021
0
The suspended tariffs mark a first step toward repairing a transatlantic trade partnership that's been strained for nearly 17 years by complaints on both...

Here’s your ultimate guide to Samsung’s smartphone lineup, from the A50...

US and EU agree to suspend tariffs linked to long-running Boeing-Airbus...