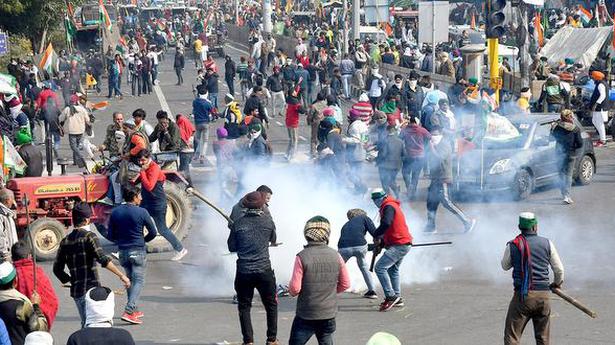 
A major clash broke out between police and protesters after a large group of farmers in tractors reached ITO Chowk and tried to move towards Lutyens’ Delhi on Tuesday.

Also read | How the farmers’ protest lost its way

The protesters broke past the police barriers and snatched the keys of a police bus that was parked to stop them from moving further towards central Delhi. The farmers moved the bus to allow tractors to make their way towards Tilak Bridge.

On the way, some protesters damaged police barriers near the Old Delhi police headquarters.

Around seven tractors rammed a DTC bus parked at the ITO crossing and managed to push it away.

The police, however, managed to push the protesters back to the ITO crossing.

A large group of youngsters also went on a rampage, damaging police vehicles, iron railings, and other public property at ITO Chowk. They also tried to move a DTC bus placed under Tilak Bridge, but failed to do so after a lathi-charge.

A small group of protesters drove their tractors recklessly at the ITO crossing to clear a path through the police line. The police, however, managed to puncture the tyres of several tractors. Subsequently, many protesters moved towards the Red Fort.

Around 1.30 p.m. a protester died after his tractor allegedly overturned at Minto Road, where the Delhi police had placed barricades to stop the protesters. The farmers, however, alleged that the man died in police firing. Some protesters also misbehaved with media persons and snatched their mobile phones and cameras.

A police officer said they had clear instructions not to open fire. Rapid Action Force arrived at 1.45 p.m. to control the situation.

Delhi Newsresults.in - March 4, 2021
0
Long waiting hours marked the third day of inoculation for people aged 60 and above and those between 45-59 of age with co-morbidities...