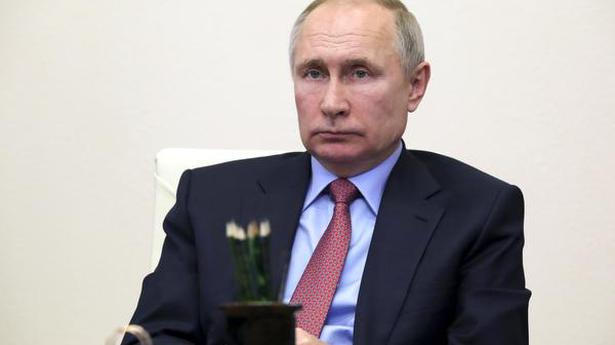 At the online Davos Agenda Summit, the Russian President also warned of parallels between the current era and the early 1930s in terms of shared challenges and increased social stratification

Russian President Vladimir Putin on Wednesday warned that regional conflicts are multiplying and the international security system is degrading, giving rise to risks of a collapse of global development and of “a fight of all against all”.

In a strongly-worded special address at the World Economic Forum’s week-long online Davos Agenda Summit, Mr Putin also warned of parallels between the current era and the early 1930s in terms of shared challenges and increased social stratification.

“That has fuelled both right- and left-wing populism, and an increase in extremist movements,” he said.

Referring to the nuclear arms agreement, Mr Putin said it is “the correct step” but conflicts are multiplying, and the situation “might develop unpredictably and uncontrollably if we sit on our hands and do nothing.” Russia’s GDP is projected to grow by 3% this year after a contraction in 2020, largely due to pandemic-related restrictions and disruptions faced by a commodities-based economy.

“There is a risk of collapse of global development, and a risk of a fight of all against all,” he added.

Referring to IMF’s estimates, Mr Putin said the level of aggregate public and private sector debt is close to 200% of global GDP, while it was 300% in some economies.

At the same time, some economies have zero per cent interest rates and the main developing countries have their rates at historic low levels, leaving limited scope for further easing.

He also said the increased gap between real and virtual economies represents a real threat.

Mr Putin further said the coronavirus pandemic has greatly accelerated technological developments, but the process is also bringing about new structural changes in the labour market.

“Therefore, without efficient efforts by states, many people are at risk of losing jobs and this often affects the most the so-called middle class, which constitutes the core of any modern society,” the Russian President said.

He further said growing economic problems and inequality are splitting society and paving the way for social and racial intolerance.

“Systemic problems lead to public discontent and it requires special attention. These problems should be resolved as they can prove to be dangerous and are buried deep,” Putin said.

Putin also noted that digital giants have been playing an increasingly significant role in the life of society.

He said restrictions in the technological and information spheres also pose a risk of dramatically increasing the risks of unilateral use of military force.

President Putin said that while globalisation and growth have lifted many people out of poverty, millions of people “even in rich countries” face dimmed prospects for wage growth and increasingly limited access to healthcare and education.

He said the pandemic has exposed many glaring shortcomings of the global economy, which are a direct result of policies of the last century. These policies led to excessive deregulation and minimal taxes for the wealthy and corporations, he said.

It is important to move from general statements to actions when it comes to reducing social and economic inequality, he said.

“A person should have a comfortable environment to live in with adequate infrastructure and developed countries should focus on building an economy that does not view people as a means, but places them at the centre,” Putin said.

Hundreds of houses destroyed by twin tremors in Greece

Life-style Newsresults.in - March 8, 2021
0
Meghan and Harry say their second child is a girl. The two made the revelation in their interview with Oprah Winfrey that aired on...